With a long history of song festivals, Estonia is a country where singing has served the purpose of both entertainment and political protest. Today's young Estonians are keeping up this tradition. 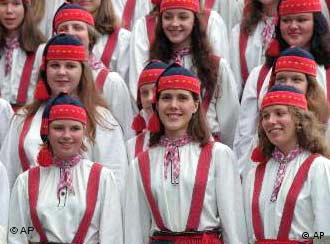 Singing is an important art form for Estonians

The small Baltic country of Estonia has hundreds of choirs, which meet at schools, churches and even factories.

Many towns hold regular music festivals of their own, but the vocal climax for the country is the Estonian Song Festival, which takes place every five years. First held in 1869, the event continued throughout Estonia's tumultuous history and now attracts tens of thousands of participants.

Music as a political tool

At 34, accomplished singer Tomi Rahula is too young to remember the worst of the Soviet rule over Estonia, which lasted from 1944 to 1991, but he clearly recalls occasions when Estonians used song to defy the Soviet censors.

"There were songs that we were supposed to sing about Lenin and Stalin, but when that singing ended people didn't go away - they started to sing songs that they weren't allowed to sing," said Rahula. "[The authorities] couldn't do anything because there were like 80,000 people."

With its strong economy and highly educated workforce, Estonia has become the envy of many former Soviet republics since its independence. Even in the two decades since the fall of the Soviet Union, singing has not lost its significance in the republic.

When the weather is good, music is taken outside

Rahula is the concertmaster and conductor of the Tallinn Boys Choir, which was founded by his mother, Lydia Rahula, in 1988. The two of them work well together, in spite of - or perhaps because of - the family connection.

"We feel the music very well [together]," said Lydia Rahula. "We can just look at each other and know. It works - we have the same understanding, the same heart, although we have two heads."

The choir, made up of men and boys aged six to 36, rehearses several times a week and performs more than 30 concerts per year. Everything from Ave Maria to African spirituals is included in their repertoire.

As a child, Tomi Rahula was a choir boy, but also a composer. In 1998, he penned the tune Estonia took to Eurovision Song Contest, "The Children of the Sea." These days, he juggles his choir duties with his other role as keyboardist in the successful rock band The Sun.

"I perform in churches and in clubs and I see very intelligent people and very drunk people," said Rahula, laughing. By living out his music career on both ends of the spectrum, he says he never gets bored.

While his style of music might change from day to day, fame has not changed him much, according to his friend and fellow choir member Ants Aguraiuja.

"We were at the same school and he was one or two years younger," said Aguraiuja. "We've been singing with him for almost 30 years. He's the same."

At 36, Aguraiuja is the veteran of the Tallinn Boys Choir. He was scouted by Lydia Rahula at the tender age of six, and has followed her ever since.

"It has been a pleasure to sing and music gives my soul something that I need," said Aguraiuja.

If the rest of Estonia shares his sentiment, there is sure to be plenty of singing involved at next year's celebrations of the country's 20th anniversary of independence.

A challenge often facing global companies is how to bring together staff from around the world, energize them and keep them "on message." How about a bonding experience like writing catchy tunes with top musicians? (21.06.2010)

Estonia is 'most integrated country north of Germany'

Skeptics have said Greece's debt crisis should have made Estonia rethink adopting the euro, but Estonian President Toomas Hendrik Ilves says it was a natural step in the country's European integration. (19.06.2010)

Before the Berlin Wall came down in 1989, jazz singer Angelika Weiz had to fight to produce songs in English, but her record still was never released due to its criticism of the East German system. (06.11.2009)

DJ Robin & Schürze's song "Layla" was declared too sexist to be played at a clutch of festivals in Germany, kicking up a social media storm over a hit single that belongs to an infamous genre — the Ballermann Schlager.

The stage remained empty for two years, but Germany's Jewish communities now get to sing and dance again at the Jewrovision Song Contest 2022 in Berlin.

Music and song are an integral part of the identity of Estonia, which for centuries has been under Russian rule, first under the czars and then the Soviet Union.