Yemane Gebreab is the second most influential person in Eritrea. In an exclusive interview, DW asked him about the large number of Eritreans fleeing the country and Asmara's relations with its foe Ethiopia. 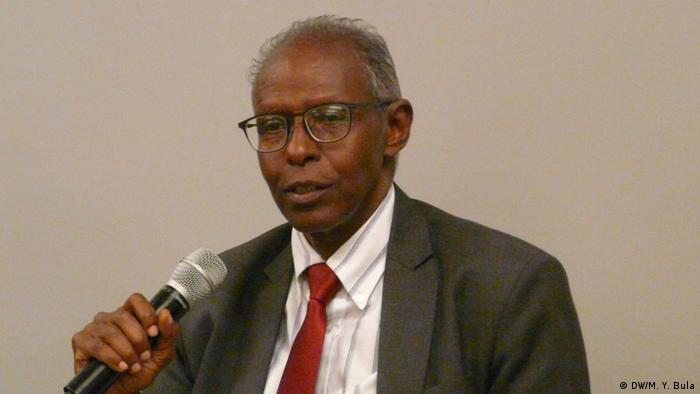 Last week, an official delegation from Eritrea visited Berlin to strengthen bilateral ties with Germany. The visit was seen as controversial, owing to several reports on human rights violations in the African country. DW talked with Yemane Gebreab, political head of Eritrea's single party and advisor to President Isaias Afwerki.

DW: Can you give us an assessment of your stay in Germany?

Yemane Gebreab: Well, I think it has been a productive visit for us. We had discussions with the Ministry of Foreign Affairs, the Ministry of Economic Cooperation and with parliamentarians, and we had a public panel on the situation in Eritrea and in the Horn of Africa in general. So for us this is a phase of re-engaging with Germany and developing partnerships in various sectors. We would like to see a more active German foreign policy and constructive role in the Horn of Africa as well.

Eritrea is often in the limelight for all the wrong reasons. Scores of young Eritreans have fled human rights abuses in their country. A recent high-level panel tried to charter new ways for an Eritrean-German dialogue. (13.09.2016)

Eritrea is often called the North Korea of Africa. Tens of thousands of people flee the country each year. This week an Eritrean delegation is set to visit Berlin for political talks. (07.09.2016)

Hundreds of migrants resisting deportation from Germany at the last minute

Some 35,000 deportations took place in Germany in the last 18 months. More than 600 were abandoned, however. Pro-free movement groups are offering information on how to successfully hinder a deportation. (19.08.2016)

The Ethiopian government has blamed Eritrea for what it calls provocation, which led to two days of fighting between the two countries. Political analyst Jason Mosley says the recent tension is not a significant upsurge. (14.06.2016)

Ethiopian troops have "unleashed an attack" at the heavily militarized border with Eritrea, according to Eritrean officials. The two rival countries are locked in a conflict following a bloody war of independence. (13.06.2016)

What makes Germany unique in doing business with Eritrea compared to other Western countries, especially with the US, which seem to be reluctant to engage with Eritrea?

Well, I think engagement with Eritrea is growing generally. We are engaged with the European Union; we have a development partnership with the EU, and other EU countries are also interested. But for us Germany is key because of obvious reasons. It is the biggest country with the biggest economy. And we have had very good working partners in Germany— in the government, the legislature, the parliament and in the business community. We have many friends in Germany; a number of NGO's have been working in Eritrea consistently for many, many years. So there is a basis on which to build.

Reports show that Eritrea has been attracting a lot of investors from abroad, particularly in the mining area. What future do you see for Eritrea in the field of investments in natural resources?

The natural resources' area is not a big sector for us. It is not the most important sector. It can be a bridge until we develop other sectors for our economy. We are very much aware of the resource curse that has affected a number of countries throughout the world. So we develop our mining sector very, very carefully. But now, as you rightly said, there are some investors in the mining sector. But we are also trying to attract investments in other sectors like agriculture, agro-processing, manufacturing, infrastructure development, transport, tourism and other areas.

One single political party has been ruling the country for over two decades now. Why is Eritrea reluctant to embrace a multiparty political system?

We are very critical of the experience of Africa in political governance since the end of colonialism. If you look at the experience, it has not succeeded. There were one-party states immediately after independence, but they didn't work. They had multiparty systems - those have not worked either. An example is our neighbor, Ethiopia, which supposedly has many, many political parties but is very far from addressing the needs of its people. So it is not the form of government for us. We are interested, chiefly, in governance based on citizenship, where citizens are treated equally. We are interested in basic fundamental rights and freedoms for our people. We want to build a political system that is suited to our own situation and that corresponds to the real needs and demands of our people. So we are in an experimental stage. We will continue to build this type of political system for Eritrea. 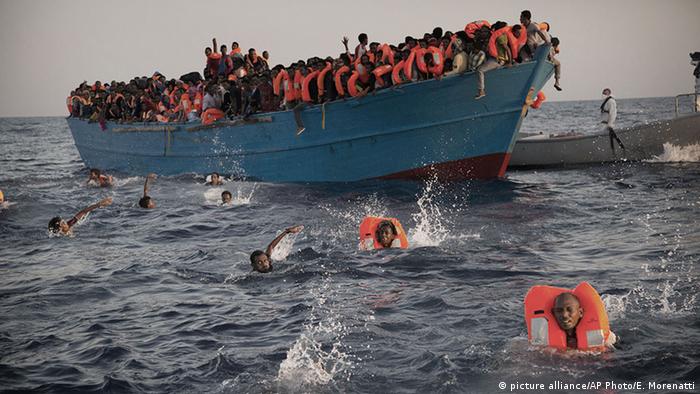 A significant number of refugees arriving in Germany are Eritrean

Eritrea drafted a new constitution in 1997, but so far it has not been implemented. What are the reasons for not implementing it?

Well, the reason is that as soon as the constitution was ratified we had a war with Ethiopia, and that complicated matters. Again, look at the process of constitution-making in Africa. In most of the countries what is written in the constitution and what takes place in real life are completely different things. We have seen a number of African counties change their constitutions because they want to keep the president in power for a few more years. So again, a constitution for us is a living document that needs to continue to evolve. And when the constitution in Eritrea was ratified in 1997, 60 to 70 percent of the Eritreans living in the country today – the young people – were not part of the process. So we want to give the whole population again another opportunity to try to craft a constitution that is suited to our own conditions. 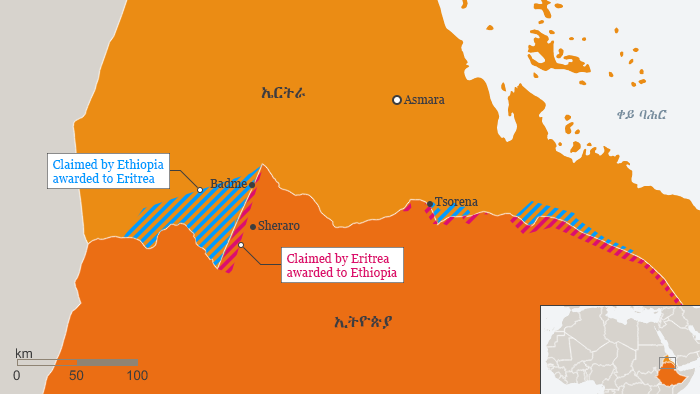 On and off, there have been border clashes from small-scale to heavy fighting between Eritrea and Ethiopia. So far, there seem to be no concrete remedies proposed by any of the two parties. Is there any suggestion that Eritrea could sit down at a negotiating table to try and solve the border problem with Ethiopia?

Well, the government in Ethiopia does not want to respect the internationally binding arbitrational ruling decision. So that is the problem. There has been a violation of international law. And I think that was done because it was linked to domestic politics in Ethiopia. The Ethiopian government does not want to address the issues of the Ethiopian people. It does not want to address the issues of relations with Eritrea, and I think those two are linked. For Eritrea, we believe a resolution for the Eritrea-Ethiopia problem will come with the issue of transition in Ethiopia. Once the situation in Ethiopia is clarified and there is a government in the country that is inclusive and wants to live at peace with the people of Ethiopia and also at peace with its neighbors, then I think the prospects for normalization and cooperation of relations between Eritrea and Ethiopia will be bigger. 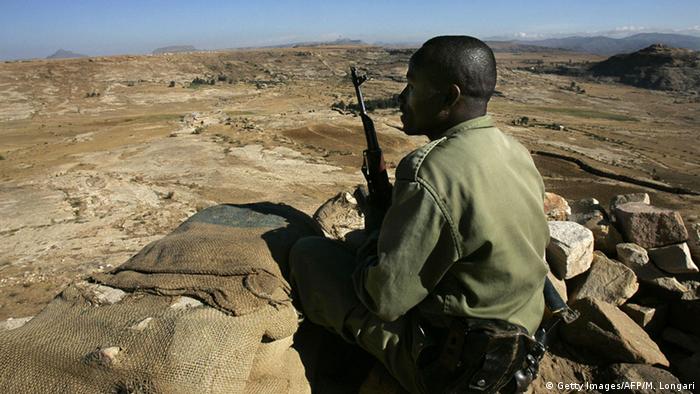 Skirmishes regularly break out on the border between Eritrea and Ethiopia

In June 2016, there was a border clash between Ethiopia and Eritrea. Your government blamed the US as alleged instigators of the clash. How did you arrive at this conclusion?

Recently, the UN Commission of Inquiry (COI) released a report alleging Eritrea has "committed crimes against humanity since 1991." But your government responded that the report has no "solid evidence or firm legal basis to support this extreme and unfounded charge." Can you elaborate on the finding of the report and the response of the Eritrean government?

It is not just the response of the Eritrean government; the Human Rights Council did not accept the report (The Council adopted, without a vote, resolution 29/18, in which it extended the mandate of the Commission for one year in order to investigate systematic, widespread and gross violations of human rights in Eritrea with a view to ensuring full accountability, including where these violations may amount to crimes against humanity. N.B). It just noted it; it did not support the recommendations that form the essence of the Commission of Inquiry report. It politely rejected the report, because there is no basis. So that is not only the Eritrean point of view, but the view of the Human Rights Council as well.

I think this is a sign of desperation from the Ethiopian government, and it has made it a laughing stock among Ethiopians. Amhara protesters in Barhir Dar and Gondar laughed at this accusation. The Oromos have always said that their struggle precedes even the birth of Eritrea as an independent state. The Oromo struggle started long before Eritrea became an independent country. So this is just ridiculous.

During the panel discussion in Berlin you stated that if Eritrea didn't have a national military and civil service, still more young people would be leaving their home. How do you support your argument, when many say that it is precisely the national service that has been driving many young Eritreans out of the country?

The interview was conducted by Merga Yonas Bula