Still under fire for attempts to cover its losses, Toshiba hopes to rebound by restructuring its workforce. It has sold off two major branches this week alone as it struggles with the aftermath of an accounting scandal. 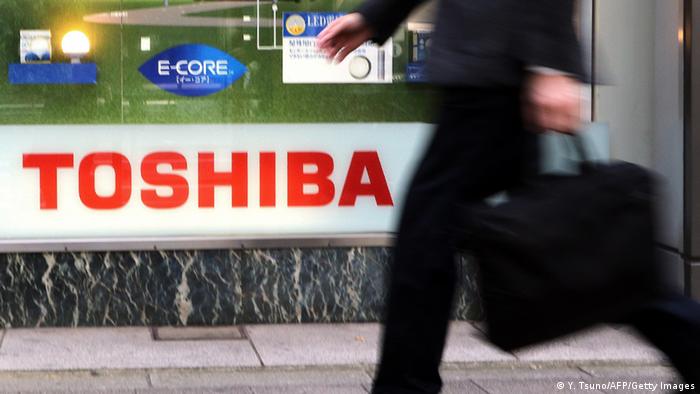 A day after announcing the sales of its medical and appliance units, Toshiba on Friday presented plans to dramatically reduce its workforce, as it deals with a loss in revenue and in trust in the midst of a major accounting scandal.

The slash in jobs - from about 217,000 to 183,000 by March 2017 - will be part of the Japanese conglomerate's plan to restructure its operations in Japan and abroad. It seeks to rebound from the current fiscal year, from which the company expects a loss of $6.4 billion (5.7 billion euros).

But its effort to bounce back will be complicated by the fallout of its admission that company leadership pressured subordinates to pad the company's books, playing up its gains and covering up its losses.

Its shares in the US took a hit on Thursday following a report that its US subsidiaries were under investigation by authorities there. Toshiba conceded that the Securities and Exchange Commission (SEC), the US market oversight body, requested information from a number of its American units.

The SEC had already slapped Toshiba with a $60-million fine last December. The scandal had also forced the resignation of an incumbent president and several top managers.

Even in the face of low global demand, Toshiba is aiming for a net profit next year of $357 billion. "We will become a company that can continuously grow," Toshiba President Muromachi said in Friday's statement.

It is aiming to do so by shifting the composition of its massive operations. On Thursday, Toshiba announced the sale of its medical unit to Japanese camera maker Canon for $5.9 billion and its appliance unit to Chinese manufacturer Midea. It also looks to shed many of its nuclear reactors - a branch that has struggled since the 2011 Fukushima meltdown - over the next 15 years.

Hope is instead being placed in Toshiba's healthy memory chip business, where it will invest 860 billion yen through the 2018 fiscal year.

Japanese conglomerate Toshiba is planning to seek billions of dollars in new credit to finance its burgeoning restructuring costs. It comes after the company's recent announcement to slash thousands of jobs. (29.12.2015)

The current and former presidents of Japanese conglomerate Toshiba have resigned after an independent report found them complicit in a yearslong scheme to pad profits. Investors welcomed the move. (21.07.2015)