Called a "heretic" of the Dusseldorf School, Elger Esser opts for enchanted landscapes. He has portrayed the provinces of neighboring France like hardly any other photographer. 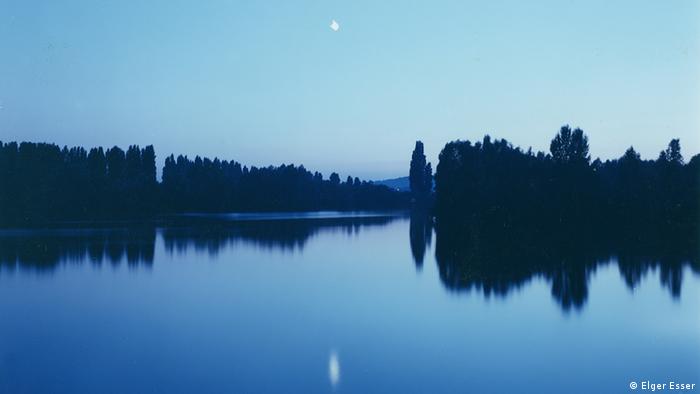 A greater dissonance between the art of Elger Esser and the location of his Dusseldorf atelier would be hard to imagine. It's located just across from a drugstore, a few meters from a discount supermarket. The courtyards neighboring Esser's atelier are peppered with automobile workshops, cheap bakeries and copy shops. It's a typically German scene of suburban drabness.

The dark-brown parquet floor dominate Esser's atelier, which is lined by high bookcases. Only a few photographs are hung on the walls; most of Essers works have been put into storage. The scene in his studio compliments how Esser describes his work, his pictures, his travels and readings.

The artist uses the space for preparation and post-production work. The photographs themselves are created en plein air. 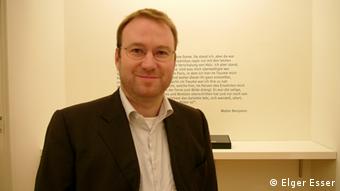 Elger Esser's atelier is in Dusseldorf, although he spends much of his time in France

Esser's large-format photographs are taken mainly in the French provinces. No other German photographer has captured neighboring France as obsessively as Esser in the past few years. The artist, born in Stuttgart, is working on a type of "memory atlas" of France, a veritable cartography of the country. His collection of around 25,000 historical, often colored postcards from the turn of the century, aid the project. Legendary French photographer Gustave Le Gray is a further source of inspiration.

The motifs of Esser's pictures are not spectacular: rivers, marchlands, simple courtyards and villages in the provinces, city landscapes, views out to sea, and - time and again - water. There's not a lot to see on the large-format photographs; the interminableness of the sky and the sea. Horizons form the center of each picture, two large planes divided by a streak of landscape, cliffs, stones.

The special element is the color. Most of the images are steeped in yellow and brown tones. The monochrome sepia tones, as we know them from early photographs, create a surreal atmosphere. Esser's works, with all their intensity and sharpness, are engrossing, melancholy and poetic. 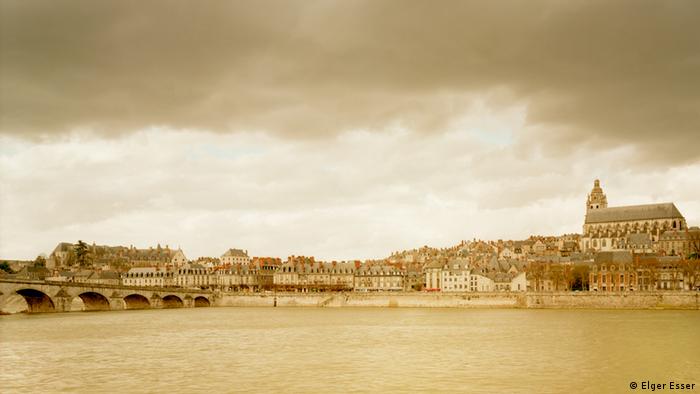 Surreal sepia tones: 'Blois' from the series 'Vedute and Landscapes'

Elger Esser is one of the most famous photographic artists in Germany. He is represented by well-respected galleries around the world, while his artworks fetch five-figure sums. His works can be found in the collections of top museums and galleries in New York, Paris or Amsterdam.

Esser studied from 1991 to 1997 with renowned photographer Bernd Becher at the Academy of Arts in Dusseldorf. The Dusseldorf School, under the tutorship of Becher and his wife, HIlla Becher, spawned photographers such as Andreas Gursky, Candida Höfer and Thomas Struth, whose images have broken world records on the art market. 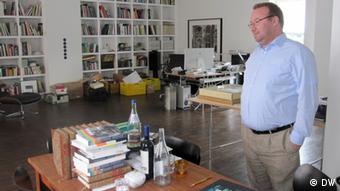 But Esser's works are fundamentally different to those of his famous colleagues. Masses of people and expansive urban landscapes can be found in the works of Andreas Gursky and other photographers from the Dusseldorf School, who tend to focus on modern buildings, interiors, houses, and global modernity.

But the subjects of Esser's works are landscapes and objects which have been around years, or even centuries.

Esser's images breathe history. Literature and the 19th century are his points of reference. In that, Esser has strayed from the strict conceptualism and limited range of motifs employed by the Bechers. A "heretic" of the Dusseldorf School is how collector and publisher Lothar Schirmer once described Esser.

Esser sees himself as a craftsman in the traditional sense. In his Dusseldorf laboratory he can be seen with rolled-up sleeves, his fingers dipped in developer and fixing solution. The manual postproduction work on his photographs is an important part of the creative process. Esser employs traditional techniques, like the nearly extinct printing process of photogravure which allows for terrific sharpness and depth. Shipwrecks as symbols of lost time: 'Le Treport' from the series 'Wrecks'

The son of a German author and French photojournalist, Esser grew up in Rome. "I grew up with German values, but with a certain Italian and French spirit," he explained. And because of that, he had a different perspective on the world. "If you're a child growing up in a city like Rome, where you are confronted with over 3,000 years of history, you have a very different concept of time." 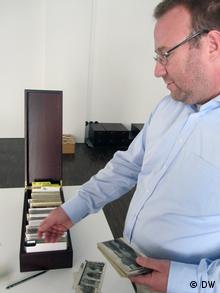 Elger Esser has a collection of over 25,000 postcards

He was surprised when he first came to his father's homeland, and was irritated by the German attitude towards modernity. Modernity was seen as a panacea, not only in art but in architecture, too. A thirst for the future may have been understandable after the First and Second World Wars, but it caused a lot of damage after 1945.

This view of history, art and of culture permeates Esser's work - and his life. "Germany is a very dear country to me, I much admire it. I don't know whether I love it though," he said.

He lives in Germany "in order to retain a sense of longing for the other." One "other" would be France, his mother's homeland. Esser travels there five to six times a year to photograph. At some point he wants to chart the entire country in photographs. "Landscapes are like states of mind," he said, "Everyone carries a landscape within them, one they naturally idealize." 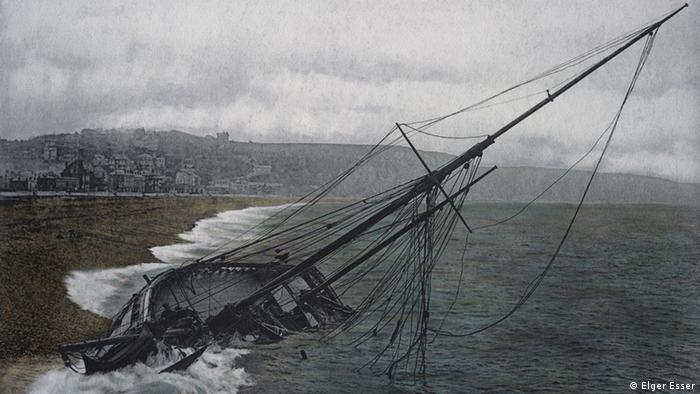 Windows on a another world: 'Fecamp' from the series 'Wrecks' by Elger Esser

Looking at the skillfully composed photographs, it's easy to see what Esser means. They are windows looking back in time; they awake memories and feelings of childhood, of the past, of an idealized, innocent state of consciousness. Esser is a romantic who makes no attempt to distance himself from the term "beauty" in art."I can't help but generate beauty. If you want to create something timeless, something removed from the flow of time, then you need to search for things which endure time," he said.

The concept of beauty is heavily disputed in art historical discourse and the philosophy of aesthetics. "In that moment, when they see something beautiful, they are confronted with their dull, workaday life. They can't handle it," the photographer said. He can appreciate that beauty has an element of the unbearable, but he believes it must be confronted.

Words such as melancholy and romantic spring to mind when looking at Esser works. But you'd be wrong in thinking that Esser is a naïve follower of the romantic cult of beauty. "Romanticism was a movement which shook-up very elementary things; it was an insurrectionary movement," said Esser.

He can talk for hours about literature, above all Proust and Maupassant, Fabre or Flaubert, but also Thomas Mann. Proust has been a continual source of inspiration: "Combray (Giverny)" is the title of a recent series of his images, currently on display at a museum in the German city of Bonn. The images were taken in Monet's water lily garden. "In Search of Lost Time," the title of Proust's seminal work, would be a fitting description for Esser's oeuvre. 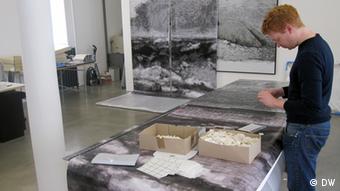 Esser's assistants helped produce his homage to Courbet's 'The Wave'

Esser's latest series of works was created on the high seas. The photographer spent four weeks on a research ship where geologists were investigating the mud volcanoesof the Gulf of Cadiz. He captured around 25,000 images of the ocean and the waves. A large number of these images have been brought together in the form of a photographic mosaic, a variation on Gustave Courbet's famous painting "The Wave" (1869). Esser's work, "Silent Waves," is currently being exhibited in Oldenburg Castle in Lower Saxony through the end of September.

"Silent Waves" encompasses the familiar characteristics of Esser's work: Reflections on the history of art, a preoccupation with the elements, the ocean - the element from which we all originate. The photographs touch on the most existential of questions, namely, where do we come from? What is the meaning of time? His images represent his musings on the answers to those questions. But even those unfamiliar with the work of Proust or Courbet can find a way in to Esser's art.

"If I have to read an instruction leaflet in order to understand an artwork, then something is clearly wrong with the artwork," Esser said.

Berlin gets artsy this summer

With Midsummer's Day behind us, summer is in full swing and, with it, a collection of events for art lovers in the German capital. DW's Louise Osborne took a closer look. (29.06.2012)

dOCUMENTA (13) is platform for women artists

Almost a third of the participants in Kassel are women. Many of them are relatively unknown. dOCUMENTA (13) provides an international platform - in particular for young female artists. (13.06.2012)

The Städel Musuem may not look all that different, but scratch beneath the suface and you'll discover its whole new look. Some 50 million euros were spent on a new extension and renovations to the historic building. (05.03.2012)