Stuttgart's Wilhelma Zoo is using surplus pine trees to feed its elephants and other herbivores after Christmas. The trees are "not much of a treat," but breaking them down is fun for the elephants, officials say. 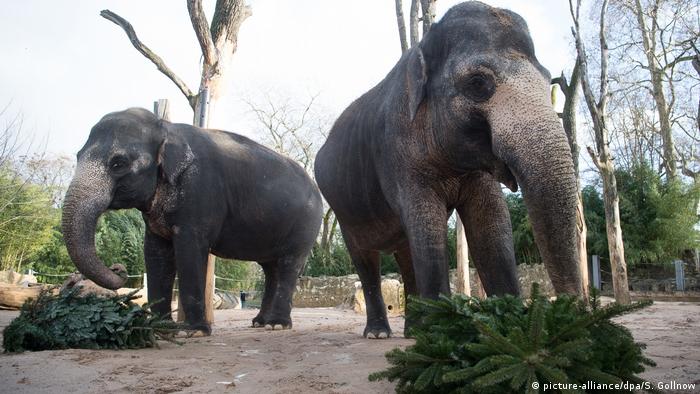 A zoo in the southern German city of Stuttgart is taking unused, leftover Christmas trees and to provide food, entertainment, and decoration to its animal residents. About 150 to 200 unused trees will be transported to the Wilhelma Zoo by the end of January.

"What we know about these trees is that no candles were lit on them and no tinsel was hanging from them," a spokesman for the zoo said.

Most of the animals usually chew bark off the trees and only eat a few of the pine needles. However, animals like donkeys, goats, and deer enjoy the trees, according to German mass-circulation daily Bild. Other animals, like elephants, are less thrilled.

"For the elephants, a pine tree is not much of a treat," according to the spokesman. However, they enjoy playing with the trees and breaking them down is a good "pastime" for the animals.

"Other animals, like big cats, find the scent exciting," he added.

Finally, the trees will also be used as decoration, for example inside the aviaries.

The Wilhelma Zoo and other zoos across Germany have been using surplus trees for years. However, they will not take trees that have already been used by private citizens.