Following a bombing at a police station, Egypt's army chief has asked Egyptians to give the military a mandate to end "terrorism" threatening the country. People are supposed to take to the streets to show their support. 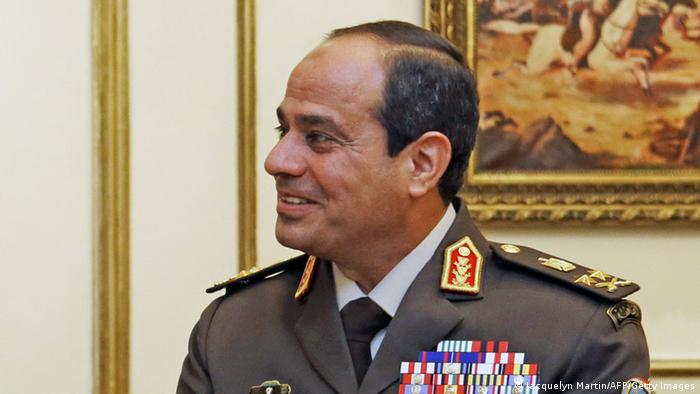 General Abdel-Fatah al-Sissi called on Egyptians to hold mass demonstrations at the end of the week as a sign of permission for the military to battle "violence and terrorism."

"On Friday, every honorable and honest Egyptian must come out. Come out and remind the whole world that you have a will and resolve of your own," al-Sissi said during a televised speech he was giving during a graduation ceremony at Cairo's military college. "Please, shoulder your responsibility with me, your army and the police and show your size and steadfastness in the face of what is going on," al-Sissi said.

A senior member of the Muslim Brotherhood rejected the appeal to Egyptians soon after the speech.

"Your threat will not prevent millions from continuing to gather," Essam Erian wrote on Facebook, according to the news agency AFP.

The Muslim Brotherhood has accused the transitional government of targeting its members during mass demonstrations. On Wednesday, a statement on the Islamist group's website alleged that plain-clothes agents had fired live ammunition into the crowd at a pro-Morsi march, killing two people. Emergency services only confirmed one death in the incident.

Tensions have escalated as supporters of ousted President Mohammed Morsi become more vocal in their calls for his reinstatement and more deliberate in their rejection of the transitional government. Violent clashes have led to the deaths of over 100 people since the Egyptian military removed the president from power.

Morsi's family has also joined the outrage felt by his supporters. On Tuesday, they threatened to seek international justice if the military continues to hold the deposed leader without charge. The ex-president disappeared completely from public view and has not even been seen by his family since his removal from power on July 3 by General al-Sissi.

A bombing - condemned by the government as an act of terror - in the Nile Delta city of Mansour overnight prompted al-Sissi's call for public support of military action against dissidents.

At least one person was killed when unidentified assailants detonated a bomb at a security building in Mansour, which lies about 126 kilometers (78 miles) north of the capital city, Cairo. The explosion wounded over 15 people.

"The Mansour terrorist incident will not cause Egypt's resolve to waver," he said. "Egypt has triumphed in the war against terrorism before and will win again today," presidential spokesman Ahmad al-Muslimani said in a statement early Wednesday.

The head of the Muslim Brotherhood, Mohammed Badie, distanced the group from the bombing, saying its activities were "peaceful." However, Badie defended Egyptians' right to contest the removal of the ex-president.

"Our cause against the coup is fair, and we demand the return of legitimacy," the Brotherhood website quoted Badie as saying.