Eggs, rabbits and the commercialization of Easter | Germany | News and in-depth reporting from Berlin and beyond | DW | 25.04.2011

Eggs, rabbits and the commercialization of Easter

Bunnies and brightly colored eggs are an integral part of Easter in Germany. But Gunther Hirschfelder, an expert on customs, says that the commercialization of Easter has left Christian traditions behind. 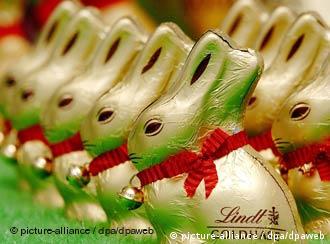 Chocolate bunnies are now a must-have at Easter

Gunther Hirschfelder is an expert on customs and a professor of Cultural Studies at the University of Regensburg.

Deutsche Welle: Have you ever dyed Easter eggs or do you buy them ready-made in the supermarket?

Gunther Hirschfelder: Buying ready-made eggs is always filled with pitfalls. The finished eggs alienate us from the customs. Hand making the eggs is an integral part of Easter. In many religions, including Christianity, the egg is a symbol of life and resurrection. Anyone who has ever seen a chick hatch can clearly understand the logic behind this. Indeed, the egg has been a part of the oldest and most important Christian festival since the third century, and today it is central to Easter celebrations.

But perhaps as early as the 14th century, and certainly since the 16th century, a very strange symbol emerged alongside the Easter egg: the Easter bunny.

In the biblical interpretation of the gospels, an animal called the rock hyrax is mentioned in connection with the fasting rituals. But following a mistranslation by Augustine, the biblical rock hyrax came to be thought of as a hare. Hyraxes are found predominately in South Africa, and to a certain extent in the Middle East, but don't exist in Europe. They are actually related to an elephant but resemble rabbits. Through this mistranslation, the hare worked its way into the accepted wisdom of the church and to a certain extent became a symbol of the resurrection. But it was only in the second half of the 20th century, during the great boom of the chocolate industry, that the Easter bunny actually became the world-famous symbol it is today. 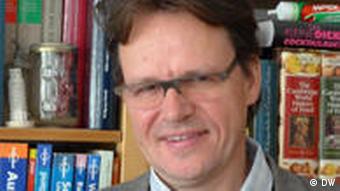 Hirschfelder believes in the value of Christian traditions

This is a clear example of how industry and trade are powerful forces in shaping modern culture. The first forms of the Easter bunny were recorded in the 19th century and left Europe with German emigrants. It's evident from this that the Easter bunny is actually German. Today it has possibly even surpassed the Easter egg as a worldwide symbol of Easter. It is internationally recognized as the most European-occidental-Christian Easter symbol.

For many, Easter means gifts, free time and consumerism. Easter egg hunts and the Easter bunny are a large part of that. What does Easter mean to you?

I'm a professor of cultural studies, so for me, Easter is a fantastic field of activity. It is an opportunity for the analysis of cultural processes and an indicator of how popular culture, spiritual culture and intellectual culture are changing today. It also provides an insight into how globalization works.

On the other hand, however, I am a democrat and a Christian, so Easter also has a completely different meaning. I'm affected by it. I try not to just look at it analytically, I also try to participate. As a Protestant, I consider Easter first and foremost a time to reflect. It's a time where you can take a look at yourself and go some way to reflect on your life and conduct.

This is especially effective if you take part in the customs of the Protestant Church and participate in Lent, when you give things up for a seven-week period.

But don't some people have the impression that fasting and giving things up isn't about a religious experience, but about losing weight?

If we take a look at the practice of fasting in Germany, it's clear that there has been a big change in recent years. This change has come about since the middle of the 20th century. Up until then, Germany was Christian through and through. That doesn't necessarily mean that people were deeply religious, but that Christianity, liturgy and customs fundamentally influenced people's thoughts and everyday lives.

But since the second half of the 20th century, we have seen a terrific process of erosion that has led to today's de-Christianization of society. We work a lot with Christian symbols, but practices such as fasting are removed from this Christian context. This means that society today fasts to improve physical appearance and not because we are following Jesus' 40-day fast in the desert.

A poll conducted by pollsters Ipsos found that only a third of respondents living in western Germany go to church at Easter. In eastern Germany, that figure was just one in ten. As a Christian, do you find that shocking? 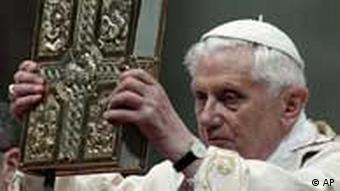 For many, the traditional Christian meaning of Easter has been lost

I doubt than even one in three people go to church at Easter. I've been watching the situation closely for many years and alternate the places of worship I visit, partly out of academic interest. The figures may be even lower than that. It doesn't surprise me, and there are a multitude of reasons why this has happened.

When reflecting on Easter church visits, we must first of all remember that Easter is the most important Christian holiday. But for many people, the fact that a man named Jesus is supposed to have died on the cross and then rose again is so absurd that they say it's implausible. For them, Easter means taking a trip, possibly to a shopping mall or to an outlet over the border (in the Netherlands, for example,) which is open on Easter Monday.

How does a Christian celebrate the Easter week, from Palm Sunday to Easter Monday?

We remember the last week of Jesus' life, how on Palm Sunday he rode into Jerusalem on a donkey and how he was greeted with palm branches as the king of the Jews. We then remember his work in Jerusalem, his trial and how he was sentenced to death and crucified on Good Friday. According to the Western interpretation, Jesus died on the cross at three o'clock in the afternoon. The hour following his execution is meant to be the quietist of the year. There is complete silence, and you shouldn't be doing anything. But customs are very different today.

On Holy Saturday, the Easter celebrations slow down. In the pre-modern period and also in the 20th century, it was common to do a spring cleaning on Holy Saturday, in order to be ready for the high point of the Easter period, Easter Sunday. The biggest liturgy in the Catholic Church takes place on the evening of Easter Saturday with the Easter Vigil. Easter then actually begins on Easter Sunday, with the Easter service and the end of Lent. This is because, traditionally, people brought the food they couldn't east during Lent to the Easter service. There, the foods are consecrated and blessed before they are taken home and eaten. Over the course of the 20th century, however, the huge range of Easter customs has been reduced.

Probably no one does Holy Week with more pomp and ceremony than the city of Seville, in southern Spain. This 450-year-old tradition is very much alive and well, and not just among the religiously devout. (22.04.2011)

While shoppers make a last minute dash to stock up on chocolate eggs and bunnies, DW's Tamsin Walker asks what role they play in a typical Berlin Easter. If indeed there is such a thing… (21.04.2011)

The weekend in Germany brought soaring temperatures as activists celebrated one of the country's Easter traditions. Opposition to NATO intervention in Libya and renewed concern about nuclear power dominated the agenda. (23.04.2011)