While shoppers make a last minute dash to stock up on chocolate eggs and bunnies, DW's Tamsin Walker asks what role they play in a typical Berlin Easter. If indeed there is such a thing…

I recall one Easter some years back when, for some reason or another, I had decided to try my hand at making hot-cross buns. They must have smelled all right because I remember my neighbor commenting on the pleasant aroma wafting out from beneath my draughty door into his kitchen.

In exchange for his complement, something my baking doesn't elicit easily, I offered him a bun. He took it and asked me if there was any significance to the cross on top. When I said it symbolized the Crucifixion - which further research tells me is actually a matter of some dispute - he visibly shrunk back, hastily assuring me that Easter held no religious meaning for him. Whatsoever.

Having myself grown up in a family where Easter services were given less priority than garishly painting eggs to be hurled down a suitably steep hill as per time-honored Scottish tradition, I thought I understood where he was coming from. But only after having spent many years living here, do I grasp how easy it is to forget that there is a religious element to Easter. 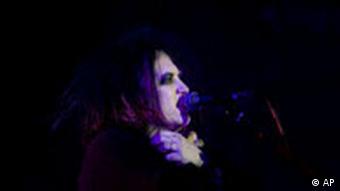 The Cure is providing a dark alternative to Easter

The listings for the coming weekend are testimony to the city's secular approach to the occasion. There are Easter swing, punk and tango festivals, a pageant of knights, speed-dating, horse races, and, of course, parties, parties, parties. The blurb for one Fest warned anyone expecting to see Berlin filled with the color of a million painted eggs to be prepared for a disappointment.

"It will be black in the city," read the announcement. The reference was not to an Easter version of the Grinch, but to a "Cure Party," an annual two-day celebration of the eponymous British pop-post-punk-Goth (hence the black) band.

Why the coming weekend should be hijacked by Berliners in need of a lengthy party has a number of valid explanations. One is that they love to party and when better to do that than a long weekend in spring? Another is that the communist authorities in Berlin's former East opposed religion and persecuted the devout.

When the GDR was first formed, over 90 percent of its citizens were Christians. By the time the Berlin Wall fell in 1989, that number had shrunk to just 25 percent. And the legacy of decades of atheist education clearly lives on in Berlin, presenting itself in the guise of Robert Smith fans who would prefer to listen to the Cure front-man singing "Faith" than actually have one.

A time to relax

As one friend of mine who grew up in East Berlin told me, "I just don't have a church background and it's not something I can recreate for myself later in life." A lament? Maybe. "It would have been nice to have the choice, but the most I can ever be is a spectator." 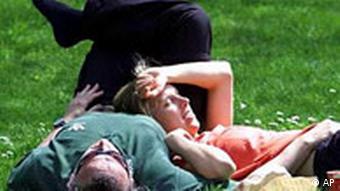 To church or to the park?

For her and many others like her, Easter was about family, hunting for painted eggs and celebrating the coming of spring. And it still is. Although the family element, I am assured, is no longer as exclusive as it was a couple of decades ago. These days, couples with kids hang out with other couples with kids, and others still.

Another friend told me that last year she'd been along to the meadow at the Volkspark Friedrichshain to hide eggs and relax: "There were about 60 of us all together. It was an unorganized party and everyone was just really happy to have a few days off work." The very same scene was being repeated all over the crowded park, as no doubt it will be again this year.

But what of Berlin's faithful? What do they do while the parks are bursting with young families and the punk, tango and swing reverberates around them? I believe somewhere in the city there must be a church service, maybe even two, and, failing that, I know for a fact there's a selection of Bach chorals and passions to choose from.

If I were around this Easter, I might go to a St. John's Passion myself, or go to the park or even slip into some winklepickers and head off to the Cure party. But I won't be here; I'll be back in England, more than likely painting eggs to throw down a hill.

Soccer fans of all stripes make themselves at home in Berlin

Germany has a rich soccer culture, but to experience it all you'd have to crisscross the entire country ... or would you? There's another way: Cruise Berlin's streets, following the cheers and the scent of beer. (15.04.2011)