The European Court of Human Rights has blocked the extradition of a Latvian hacker wanted by the US. This latest cyber extradition drama concerns the Gozi virus - which has infected millions of computers worldwide. 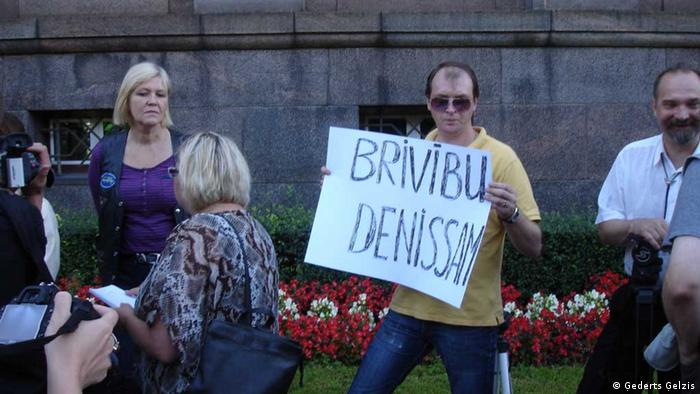 Under the hot rays of the midday sun dozens of people have been gathering in peaceful protest outside the government building in Riga. They are holding banners and demonstrating against the extradition of a Latvian hacker to the United States.

The hacker in question is Deniss Calovskis, a 28-year-old IT specialist, who has been in the limelight in Latvia recently. His family, friends and supporters are confident that if he is deported to the US, he will never return to Latvia. Jelena Calovska, Deniss' mother, organized the protest. 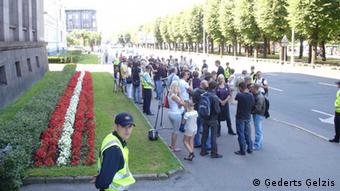 Supporters have been outside Riga's government building for days

"He's innocent, there's no evidence. My son is not guilty."

She says that Calovskis is not the person behind the alias "Miami" - a hacker who helped to improve the Gozi virus that has infected over a million computers around the world and caused losses of tens of millions of dollars since emerging a few years ago. The virus was invented by a Russian hacker, Nikita Kuzmin, and was distributed among cyber criminals with the help of Romanian Mihai Paunescu. They all have been apprehended, and Calovskis has been in custody since December last year.

Calovskis insists he is innocent and recently told Latvian State Television that he had nothing to do with the scam.

"All I can say is that I don't know any Russian or Romanian citizen. And I actually don't even know anything about the Gozi virus. I haven't helped anyone carry out any schemes or make any money."

Wanted in the US

The US Federal Bureau of Investigation accuses Calovskis of developing a computer code known as "web-injects" which changed the way banking web pages operate. The FBI alleges it was used to trick people into disclosing their personal information in order to steal money from their bank accounts. If convicted in the US, Calovskis faces up to 67 years in prison.

The request to extradite Calovskis to the US, however, has provoked a heated debate among Latvians - including government ministers. Foreign Minister Edgars Rinkevics, of the center-right Reform Party, says the hacker shouldn't be extradited.

"The maximum penalty for the crimes alleged would be around 10 years behind bars in Latvia, but the penalty he faces in the States actually means life imprisonment," said Rinkevics, adding that it's not clear whether the crimes in question were committed in Latvia or the US, nor whether he would be able serve the sentence in Latvia if extradited.

The European Court of Human Rights (ECHR) said on Thursday after agreeing to accept the Calovskis complaint that it would give "high priority" to the case. Based on cases that have been given "high priority" by the ECHR in the past, this means it could take up to two years before a decision is reached.

Ilona Bulgakova is one of the three lawyers who filed the complaint. She says that when the US court ruled on arresting the Latvian hacker last year, there was no one defending him in the court. 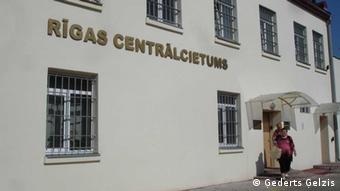 Calovski is being held in Riga's central prison

"We believe the extradition of Calovskis is not acceptable because it violates his fundamental human rights which are stated in the Constitution. This represents an abuse of rights that negates the possibility of reaching a just sentence. Principal among these abuses is that he was not provided a lawyer at the beginning of the extradition process," she told DW.

Bulgakova's attempts to protect Calovskis appeared to have failed at the beginning of August when the government moved to greenlight his extradition. Justice Minister Janis Bordans, of the National Party Alliance, said right after the decision that they would continue to assess requests for extradition on a case by case basis.

"No precedents have been set in this matter. Each and every person will be given fair and transparent trials. I really have absolutely no concerns about this question."

Lawyers of the alleged hacker say the government has indeed set a precedent for future cases in which Latvian citizens are accused of cyber crimes. This is why Calovskis turned to the ECHR as a last resort to prevent the extradition.

And, as more and more European countries are refusing to hand over their citizens to other countries, Foreign Minister Rinkevics has commented that it's "about time" to reconsider the extradition treaty between Latvia and the US.

US President Barack Obama has cancelled a meeting with Russian President Vladimir Putin in response to Russia's decision to grant Edward Snowden asylum. But Obama will still attend the G20 summit in St. Petersburg. (07.08.2013)

The US attorney of WikiLeaks founder Julian Assange tells DW what it will take for his client to leave the Ecuadorian embassy in London. Michael Ratner also offers some advice for NSA leaker Edward Snowden. (07.08.2013)