The documentary revisits the Laurel Canyon music scene, which created bands like the Beach Boys and left a lasting impact on music history. The community was rife with psychedelics, parties and musical experimentation

Some cities are rooted in music history, like Detroit with Motown or Seattle with grunge rock.

In some cases, a musical scene is even associated with a specific neighborhood ⁠— like Laurel Canyon in the Hollywood Hills West district of Los Angeles. The hilly neighborhood became the counterculture center of the late 60s and 70s and is known as the birthplace of California folk rock, which emerged around 1965. A variation of the West Coast sound, it was never a clearly defined musical genre, but involved musical legends such as the Beach Boys and The Mamas and the Papas.

As the first bars of "Turn! Turn! Turn!" by The Byrds or the intro to "California Dreaming" by The Mamas and the Papas indicate, the California sound was something special. It symbolized new beginnings and hope in a time of great social upheaval.

The documentary Echo in the Canyon, released in Germany on June 8, tells this story.

A new place and sound

From 1965 to 1967, during the golden era of the hippies and love and peace, California couldn't get enough of The Byrds' Mr. Tambourine Man or the Beach Boys' Pet Sounds. Even the Beatles, who were the world's top band, were enthralled by the sounds coming out of sunny California. In the cultural consciousness, music from this forested neighborhood became as synonymous with flower power as the peace sign or the Woodstock music festival.

Five years ago, Andrew Slater, a filmmaker and the former head of storied label Capitol Records, organized a concert in honor of the Laurel Canyon scene with singer-songwriter Jakob Dylan (the son of Bob Dylan). This gave rise to the idea of making a documentary film, directed by Slater with Dylan conducting interviews as the protagonist.

Throughout the film he meets the artists responsible for Californian folk rock, some of whom still partly reside in the famous canyon. During their heyday, they influenced one another, creating a musical sound for which the area became known. Roger McGuinn of The Byrds, David Crosby, Stephen Stills, Graham Nash and Neil Young, Brian Wilson of the Beach Boys and Carole King are among the musicians who once lived there and left their mark on this feel-good sound. 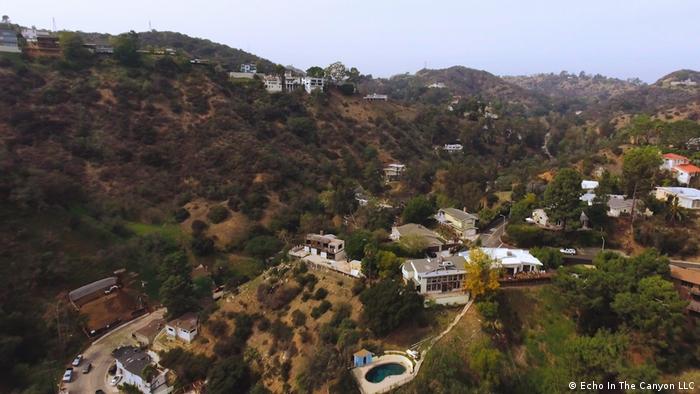 The mountainous Laurel Canyon neighborhood of L.A. was the epicenter of the California sound

Although the city center of Los Angeles was only a short drive away, the Laurel Canyon musicians skipped the clubs of the city and instead held house parties, took mind-expanding drugs and jammed together day in and day out. The free flow of ideas meant the musicians influenced one another, sometimes "stealing" musical concepts or ideas from one another — a kind of exchange that was embraced and accepted.

Several developments led to the success of the Laurel Canyon scene around the time. For one, guitar maker Rickenbacker developed a 12-string electric guitar that gave amplified folk exactly the sonic boost it needed.

Secondly, for the first time, DJs played rock music with poetic depth on the radio.

Until this period "bubblegum-pop" — a musical subgenre that emerged in the 60s and was targeted at teens — was the primary pop sound. But with the Laurel Canyon scene came a more sophisticated message, with socio-critical voices coming into prominence. Bands set lyrics by folk icons like Pete Seeger or Bob Dylan to music in new ways. "We were beginning to take rock 'n' roll seriously," David Crosby says in the documentary. Thus, folk rock was born.

A lasting influence on pop and rock music

In the film, Neil Young's departure from the band Buffalo Springfield marks the end of the Laurel Canyon scene. Neil Young is not interviewed in the film, but his guitar can be heard throughout it. As the credits on the film roll, recent footage of Young alone in a recording studio seems to symbolize how many Laurel Canyon musicians broke away to make music on their own. 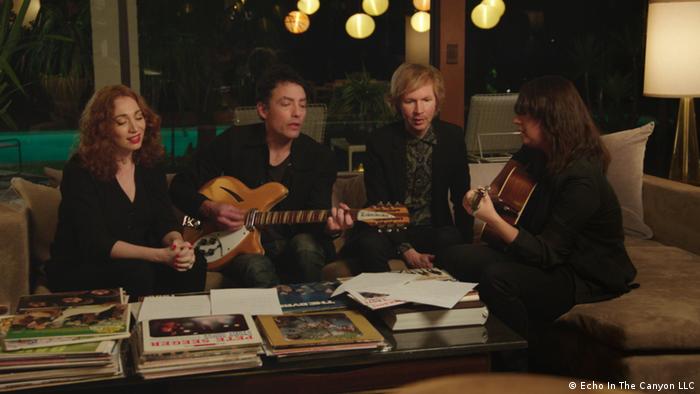 Regina Spektor, Jakob Dylan, Beck and Cat Power (from left to right) rehearse songs from the era together in a scene from the film

The Laurel Canyon sound had a lasting influence on musicians such as Tom Petty, who was inspired by the period while writing songs like "Free Fallin'" or "Learning To Fly." Other contemporary musicians sharing his influence include 80s and 90s indie artists like Beck, Cat Power, Regina Spektor and Fiona Apple, and some of them appear in the documentary to reinterpret songs from that era.

Echo in the Canyon offers a look at the short, intense era that continues to exert an immense influence on all rock and pop music today. The film is more than just a successful music documentary; it shows the USA as the best it can be: a country of unbridled creativity, poetry and openness.

While mass student protests were the most visible expression of social and political change in 1968, new film movements had already started to foretell this revolt. Here's a look at the rise of a radical new cinema. (16.04.2018)

During the summer of 1967, thousands of flower children streamed across America towards California searching for love, freedom, drugs and music. Their dream? A life free from conventions. (25.08.2017)

From Joni Mitchell to the Beach Boys, many musicians lived in Laurel Hills, L.A. and contributed to the unique Westcoast sound. Here are some of the most well-known names from this period in rock and roll history. (08.06.2020)