A real estate developer in the German capital has put on hold the removal of parts of the remaining sections of the Berlin Wall. Angry protesters had prevented workers from dismantling the "East Side Gallery." 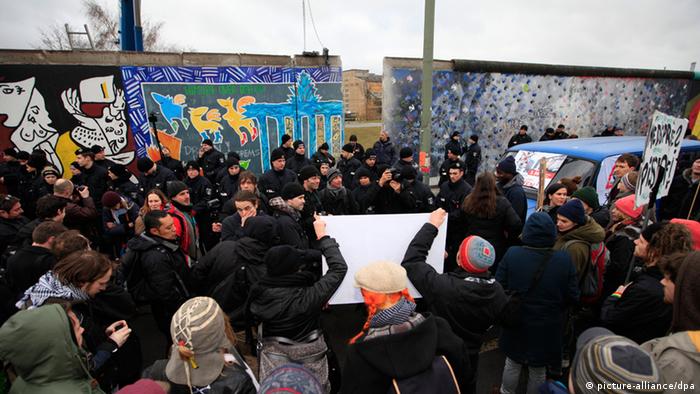 A property developer in Germany at the centre of protests against some of the remains of the once-detested Berlin Wall being knocked down said on Monday that the dismantling had been temporarily halted.

Volker Thoms, a spokesman for project investor Maik Uwe Hinkel, said removal work had been put on hold until at least March 18.

Maik Uwe Hinkel, the head of the company Living Bauhaus, had previously told the "Berliner Zeitung" newspaper that he was open to compromise.

"The crane has been taken away. We won't move any more wall segments for the time being," he said.

This followed protests on Friday, when hundreds of people prevented construction workers from removing sections of The Wall to make way for a path to a planned luxury housing project.

The number of protesters swelled over the weekend to several thousand.

Since most of the infamous Berlin Wall was torn down following German reunification in 1990, the longest remaining section is now the stretch known as the "East Side Gallery."

Artists have covered it in recent decades with brightly colored graffiti-type murals. They include the famous "Fraternal Kiss" which depicts Soviet leader Leonid Brezhnev and his East German counterpart Erich Honecker kissing mouth-to-mouth.

The 1.3 kilometer (0.8 miles) long and 3.6-meter (11 foot) high stretch of The Wall is one of Berlin's main tourist attractions, as few relics of Berlin's 28-year-long division still exist.

Developers had planned to tear down a 22-meter segment of the "East Side Gallery" to provide safe access to the residential development site on the banks of Berlin's Spree river as well as access to a planned bridge.

But the developer has said that the removal of The Wall was not absolutely necessary.

Constructed in 1961, the Wall stretched 155 kilometers (96 miles) and divided Berlin until 1989, but today only around three kilometers of it still stands.