East German Stasi tried to recruit Merkel as a spy | Germany| News and in-depth reporting from Berlin and beyond | DW | 19.05.2009

The East German Stasi secret police once offered Angela Merkel a position as a spy, but she declined, citing her talkative nature. When the Berlin Wall fell, she toasted the event with a can of beer. 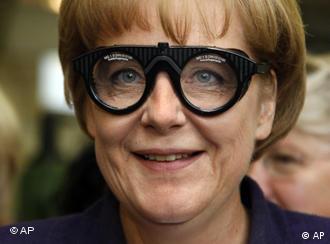 Chancellor Merkel revealed a little bit more about her youth in then-communist East Germany on a television talk show on Tuesday, amid implications from the leader of the Left Party that she was somehow complicit in the abuses of the regime.

Based on her involvement in the Free German Youth, the official socialist youth group of the communist German Democratic Republic, or GDR, Left Party leader Oskar Lafontaine said last week that Merkel had "belonged to the party's reserve of fighters."

"This black and white discussion doesn't move us forward," she countered, saying that joining the group was a matter of course for most young people.

Merkel ultimately chose to pursue a career in physics, because, as she put it, "there, the truth isn't so easily bent." But, in the late 1970s, when she showed up for a job interview for position as a physicist at the University of Ilmenau, she was escorted to a room where she was surprised to find an officer from the Stasi secret police, she said.

"I quickly said that it wasn't for me because I couldn't keep my mouth shut," Merkel commented. The Stasi apparently wasn't interested, and she didn't get the job at the university either.

Although she did consider fleeing to West Germany and had the opportunity to do so in 1986 when she visited a cousin in Hamburg, Merkel's relationship to her parents, friends and relatives was too important to take that step, she said.

When she first heard that the border between East and West was open, she called her mother and told her "it could be about to happen." Later that evening she crossed into West Berlin and then ended up "in a totally unknown apartment where there was a case of beer," she said.

While Merkel defended the individual citizens of the GDR, she said there was nothing about the system itself worth duplicating today.

The only thing the East German system taught us, she said, "was that we should never do it that way again."

Germany's Chancellor Angela Merkel has kicked off her re-election campaign with an intimate town hall meeting, something unheard of in Germany. (18.05.2009)

Berlin's notorious Stasi detention center is now a memorial site meant to educate visitors about the injustices committed under communism. But many are worried that former East Germans simply aren't interested. (05.05.2009)

Two of the German government's top-secret Cold War bunkers have recently been opened to the public. Down to the extra toothbrushes in the bathrooms, they're remarkably intact. (22.04.2009)