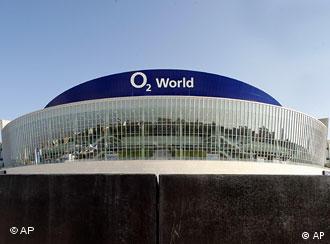 Protests are planned for "O2 World" opening on Wednesday Sep. 10

The site cuts through three of Berlin's twelve districts and crosses the border which formerly divided the city into East and West. Projects already realized under the Mediaspree label include futuristic office high rises as well as redeveloped industrial sites.

But the drastic change the project has caused to the city's landscape has also aroused fierce protest. One objection is to a large multi-purpose arena accommodating up to 17,000 visitors, which opens on Wednesday Sep. 10 after two years of construction.

Hans-Christian Stroebele, a Green party member of the Bundestag in Berlin, told the AP news agency that he felt "great sympathy" for the protest initiative "Sink Mediaspree" -- an organization opposed to building projects along the Spree river bank.

With its bright blue roof and large LED screen catching the eye from afar, the "O2 World" arena sticks out in an area of what is still a largely undeveloped post-industrial wasteland. The venue and the surrounding 24 hectare-compound is owned by US event company Anschutz Entertainment Group. 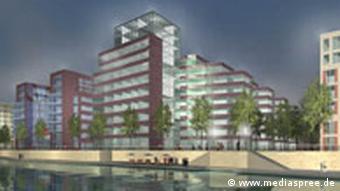 A computer generated image of the Spreeport complex

Critics maintain the arena destroys the character of the district and many have been protesting against the building of "O2 World" and other projects in the area. Some said they would stage another protest at the official opening. Local pressure groups have been lobbying to keep the Spree river banks free from private real estate developments.

On Sunday Sep. 7, 35,000 out of 187,500 potential voters cast their votes in a non-legally binding poll and eighty-seven percent were in favor of massive changes to the other Spree river-bank building projects.

Franz Schulz, Green party member and mayor of Friedrichshain-Kreuzberg where the arena is located, said that investors, politicians and those opposing the project should get together and seek a negotiated settlement. He also said that the notion of changing the building plans would be very delicate and could incur huge fees in damages.

Schultz also leant his praise to the flashy building: "It is an important development engine for the entire district."

"The Anschutz project will attract other investors. It has also had a direct effect on the ailing local labor market, providing about 900 jobs," Schulz added.

Together with its sponsor, mobile phone operator O2, Anschutz plans to celebrate the completion of the 165 million euro ($235 million) "O2 World" arena with an impressive line up of stars. Metallica, Coldplay and German singer Herbert Groenemeyer will be performing in the coming week.

A giant pontoon will be installed in Berlin's Spree River. The pilot project aims to improve water quality and make the river swimmable again by stopping sewage from pouring into the Spree. (02.08.2008)

Berlin's river Spree was long slighted by the city's inhabitants, who saw it as little more than a murky cradle of industry. Now this jaded jewel is being dusted down and polished to a state-of-the-art sparkle. (24.07.2004)