Though an Italian scientist has said he predicted a major earthquake would shake the region around L'Aquila, safety officials didn't take him seriously. They were right not to, according to international experts. 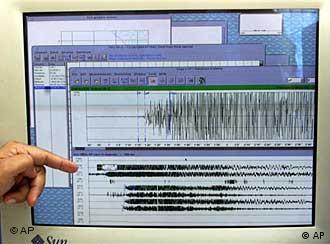 Italian scientist Giampaolo Giuliani predicted weeks ago a serious earthquake was on the way and would have a devastating effect on the central Italian region around L'Aquila.

After analyzing concentrations of radon gas in the area, Giuliani recommended residents leave their homes. Had they followed his advice, some of the more than 200 people killed in the April 6 earthquake may have survived.

But his calls for an evacuation were denounced for spreading unnecessary alarm and officials from the national Civil Protection Agency on March 31 reassured people seismic activity in the area was normal.

"The tremors being felt by the population are part of a typical sequence," the agency said in a statement from the previous week, adding that despite continuous monitoring there was no reason for alarm. "It is important to underline that it is not in any way possible to predict an earthquake."

The head of Italy's Geophysics Institute also rejected Giuliani's predictions saying, "Every time there is an earthquake there are people who claim to have predicted it."

Though scientists understand the cause of Monday's quake -- the continental plate under Africa pushes toward Europe -- and can foresee what parts of the world are most likely to experience earthquakes, predicting when they will strike remains impossible.

"We know where earthquakes occur in certain parts of the world, we know for instance that earthquakes occur down the spine of Italy," Brian Baptie, a seismologist with British Geological Survey (BGS) in Edinburgh, told the AFP news agency. "But saying when and crucially how big they will be is beyond us at the moment."

Researchers at the German Research Center for Geosciences (GFZ) agreed with Baptie.

No correlation has been found between radon gas concentrations and seismologic activity, according to GFZ seismologist Rainer Kind, who called the radon concentration and ultimate earthquake a coincidence.

"It would only become a reliable method when it has repeatedly foreseen earthquakes," Kind told German public broadcaster ARD. "This was not a case of a justified prediction -- and certainly not of a truly reliable one."

Nearly four years after the devastating Asian Tsunami of December 2004 which claimed 230,000 lives, an early-warning system developed and funded with German assistance is set to begin operation. (11.11.2008)