Emergency crews responded after southern California was hit by its most powerful earthquake in more than two decades. The 6.4-magnitude tremor caused fires and numerous injuries. 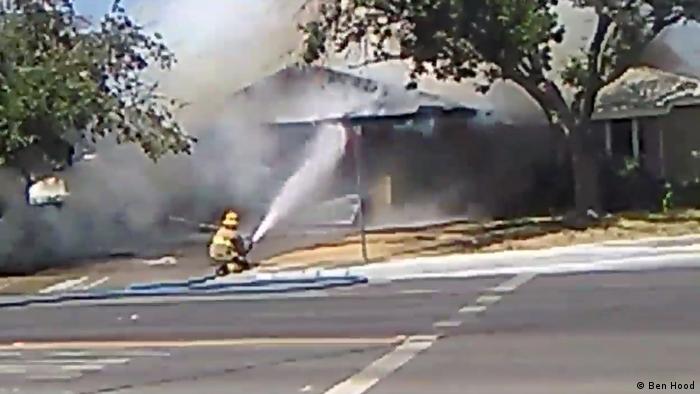 A quake with a magnitude of 6.4 shook southern California on Thursday, with tremors felt as far away as Mexico and the neighboring state of Nevada.

Worst hit was the city of Ridgecrest, some 180 kilometers (110 miles) northeast of Los Angeles, where the fire department was called to nearly two dozen incidents.

"We are used to earthquakes but we're not used to this significance," Breedon told the MSNBC television network.

Among the facilities damaged were a hospital, which had to be evacuated, and the US Navy's China Lake weapons testing range, where substantial damage was reported that included spillage of hazardous materials.

The quake's epicenter appeared to be just 6 miles (109 kilometers) from Ridgecrest, in neighboring San Bernardino County.

US President Donald Trump tweeted that he had been fully briefed of the situation and that it appeared to be under control.

According to the US Geological Survey, the tremor was very shallow — at a depth of only 10.7 kilometers — which would have amplified its effect. Dozens of aftershocks hit the area in the hours that followed the initial quake.

Witnesses reported that they could feel the quake as far east as Las Vegas in neighboring Nevada, and as far south as the Mexican border cities of Tijuana and Mexicali.

The quake is the largest to strike southern California since the Northridge Earthquake of 1994, which was recorded at a magnitude of 6.6.

A powerful earthquake has struck an island chain off Papua New Guinea's north coast. A tsunami warning was briefly issued but later lifted. The extent of any damage was expected to become clear after sunrise. (14.05.2019)

A deep earthquake in the Banda Sea shook parts of Indonesia, East Timor and Australia. The giant tremor did not cause a tsunami and there were no initial reports of major damage or injury. (24.06.2019)