DW and the UN to step up cooperation

Deutsche Welle has signed an agreement with the United Nations expanding their cooperation. It is the latest development in a partnership set up five years ago. 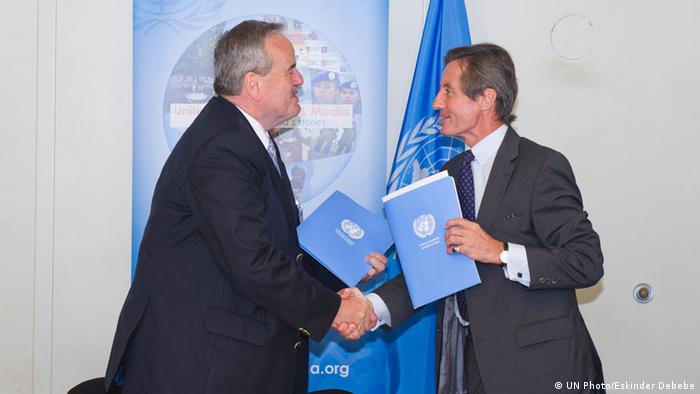 DW Director General Erik Bettermann and UN Under-Secretary-General for Communications and Public Information Peter Launsky-Tieffenthal signed a broadcast agreement on Monday at the UN headquarters in New York, aimed at boosting cooperation in the field of media.

Launsky-Tieffenthal said that “we at the UN are glad that we can build upon our long-term cooperation with Deutsche Welle, which is based on trust. This agreement lets us further expand and deepen that cooperation.”

Speaking for Deutsche Welle, Bettermann stressed that “the promotion of human rights, participation and democratization is a central aspect of our multimedia programming in 30 languages, just as it is for the UN. Cooperation between DW and the UN is particularly important for us because of this shared sense of purpose. We will be glad to continue working together in the future as well.”

The agreement enables DW to supplement its television programming with materials from UN-produced documentaries. DW welcomes this as a way of enriching its internationally-focused television series like World Stories with new perspectives and high-quality reporting from around the world.

Available in English, Spanish and Arabic, World Stories draws on content from DW's premium partners and presents highly captivating stories around the globe.

DW's globalization magazine Global 3000, broadcast in German, English, Spanish and Arabic, is a prime example of this cooperation: Deutsche Welle has been able to include selected UN materials in the program, and, in turn, the UN's television station, UNTV, has broadcast Global 3000 since the partnership was set up in 2007.

Beyond television, bilateral cooperation has grown in many other fields in the past five years including media partnership for UN events, media workshops ahead of the Copenhagen climate summit, involving UN experts in DW’s annual conference Global Media Forum, and integrating UN-relevant topics into DW’s multimedia projects such as Education for All, Voices from Today – Ideas for Tomorrow, or the educational program Learning by Ear for Africa.

Moreover, DW Akademie has opened its media training programs to UN staff. In cooperation with UNESCO, it conducted a series of training projects at universities in Morocco, Kenya and South Africa, and on behalf of the UNDP, DW Akademie provides media training to parliamentarians from Moldova. This year it is also planning radio workshops for UN reporters based in Darfur.