The Dutch banking sector is poised to lead the way in capping executive bonus payments. New regulations announced this week will limit pay-outs to the equivalent of one year's salary. 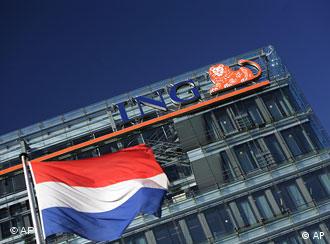 Business as usual outside ING head office in Amsterdam

Dutch banks are set to become the first in the world to put a nationwide cap on executive bonuses.

Under a new code drawn up by the Dutch Banker's Association and the finance ministry on Wednesday, pay-outs to top executives will be limited to the equivalent of one year's salary.

The code, which will come into effect in January, also states that severance pay cannot exceed a year's salary and that bonuses may have to be returned if banks run into financial difficulty.

Dutch Finance Minister Wouter Bos hailed the new measures as “a unique step in the world” and a potential model for other countries. The code, he said, “goes further than anything that has happened in any country I know of.” 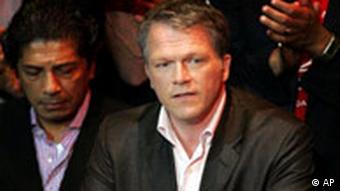 Finance Minister Bos says the Dutch are leading by example

As the most influential member of the Dutch Banker's Association, financial giant ING played a key role in negotiating the terms of the new code.

Having received a 10-billion-euro state bail out last October, ING is likely to be most constrained by the new regulations. Nevertheless, ING spokesperson Carolien van der Giessen said the company supports the principles of the code.

“We think that this bank code is an important step in the efforts of the financial sector to regain trust and stability and protect the interests of our customers”, van der Giessen told Deutsche Welle.

When asked whether ING fears that the new regulations may lead to international executives looking elsewhere for employment, van der Giessen pointed to the wider global situation. “The discussion is everywhere and it is taking place everywhere”, she said. “We'll also see changes in other countries”.

The Dutch move will add fuel to international arguments over mandatory bonus caps for executives. Six other European countries are in favor of setting stricter rules for banking bonuses, but the UK and the USA remain firmly opposed.

In London, meanwhile, the legal battle over slashed bonuses continues. A group of 72 London-based workers are claiming that Germany's Commerzbank is in breach of contract for failing to pay out 33 million euros worth of bonuses after it took over Dresdner Kleinwort last year.

The staff, mainly fixed-income specialists, said they received only a fraction of their agreed 2008 bonuses because Commerzbank slashed the company's bonus pot by 90 percent, citing material adverse change in economic conditions.

The banks have a month to respond to the lawsuit, which was filed at the British High Court earlier this week. Should it go ahead, the case will be the biggest of its kind in UK history.