A court in Duesseldorf has put the kibosh on a multi-wheeled, multi-pedal bike equipped with a beer tap and bar. But operators of the Cologne-based BierBike say the party must go on. 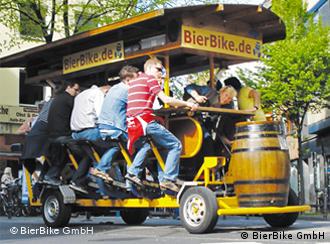 BierBikes have become a familiar - and frequently funny - sight in nearly 40 cities across Germany. But a local judge in Duesseldorf wasn't laughing on Thursday when he stepped on the brakes and banned the cycles. The decision could set a precedent in the country.

The BierBike is a four-wheeled vehicle with 12 pedalling positions. It is equipped with a beer tap and bar and accommodates up to 16 people, including the bartender and the driver.

The bar-on-wheels, which travels at about six kilometers per hour, costs about 120 euros an hour to rent. The price - without drinks - varies according to the total rental time. Alcohol consumption is limited to 10 liters per hour for a group of up to 16 people. 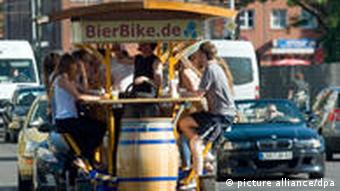 The rolling party bars had become an issue in Duesseldorf, which viewed them, among other things, as a road obstacle and a safety risk. The local court ruled in the city's favor. Under the ruling, the bikes can only roll with a special permit, which the the city doesn't intend to grant.

BierBike owners plan to challenge the ruling. They argue that the bikes are safe, are in no one's way and, most importantly, have become a tourist attraction.

"We have a codex that outlines exactly what guests can and cannot do on the bike," said Ingo Boell, BierBike's managing director, in a statement. "The driver, who is provided by the renter of the bike, is always sober."

Last year, more than 90,000 people took tours on the BierBike, and no one has been injured since the cycle has been on the road over the past six years, according to the company.

The economic downturn may have most Europeans scrimping and saving. But in Germany's carnival strongholds, people are opening up their wallets for the six days of celebrations. (11.02.2010)

Carnival: It's A Fool's Business!

Beer for the carnival fools, sweets for the crowds and fancy-dress costumes for everyone -- all this costs money! All this clowning around can mean big business for some but not everyone gets a slice of the cake. (16.02.2007)

Germany and Japan share the history of militarism and defeat in the Second World War, and both countries emerged from the ruins with a booming economy. Nowadays their economic relations are strong, and there is one place in Germany where this is especially visible: Düsseldorf, the capital of the western state of North Rhine-Westphalia, where many Japanese companies have their headquarters. More than half of the Japanese community lives in this "Little Tokyo". (17.11.2009)