German dictionary giant Duden is publishing an updated edition, including a few English root words considered too blue for Webster's or the Oxford dictionary. It may not cause a shitstorm, but flashmobs are on standby. 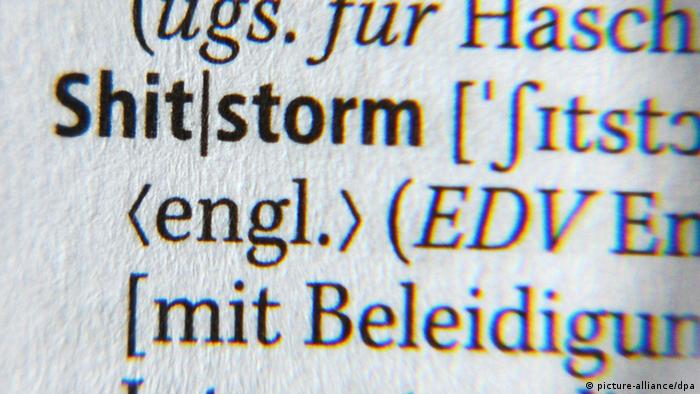 Some 5,000 new entries were prepared for the latest edition of the Duden dictionary, pushing the German vocabulary ever closer to half a million words. Politics, the Internet and fellow Germanic language English had more than a hand in the alterations.

This year's yellow-bound lexicon will include - but hopefully not cause - a "shitstorm," defined by Duden as a "storm of anger and outrage on social media." The German variant of the word stems from activist calls to inundate given organizations or individuals with such a storm in the past few years, with the Internet and social networks considered the most effective modern means to do so.

Major English dictionaries have no official entry for the word, whose meaning is rather broader and less kindly in its native tongue. Among German curse words, "Scheisse" is comparatively mild; as a result, many Germans will be somewhat liberal with their use of the four-letter English equivalent.

Other words from the computing world to make the Duden grade included "Social Media," "Facebook" and "flashmob" - defined as a "more or less spontaneous gathering of people in public places." Flashmobs are usually planned at short notice and organized online. A derogatory English slang term sometimes used to mock someone's physical or mental faculties, "spacko," made the new German list, as did the homegrown insult "Vollpfosten" that one might perhaps translate as "blockhead."

The German language has evolved in recent decades to officially recognize more and more English terms, adopting some of them with greater accuracy than others. It is often with surprise and confusion that German school children learn how the Anglophone world talks about a "mobile phone" or a "cell," not a "Handy." Many of the terms pertain to new inventions and hail from technologically advanced areas of research like telecommunications or computing.

The 'du/Sie' dilemma in German

For those learning German, choosing between the informal "du" and the formal "Sie" to address someone can be tricky. But even for native German speakers, it's getting harder to decide - after all, language changes. (05.01.2013)

According to an article in the Wednesday edition of the Westfalen-Blatt newspaper, Anglicisms now make up around 3.7 percent of German dictionary entries, trailing only classical languages Latin (5.6 percent) and Greek (4.2 percent).

Hot off the presses

Europe's debt-related difficulties helped an array of front-page words invented to cope with the various policy proposals in Brussels.

Chancellor Angela Merkel may not be happy about the inclusion of "Eurobonds" in the Duden, given that the concept of pooling EU or eurozone sovereign debt only exists on paper and is staunchly opposed by her government.

Merkel may however welcome the compound noun "Finanztransaktionssteuer," a tax on financial transactions or share deals, an equally contentious debt-combating proposal that has Berlin's blessing. A "Schuldenbremse," literally "debt brake", often used in the German press to talk about capping public borrowing, joins the German vocabulary, along with the noun "Vorständin" for a female member of a company's board of directors. German nouns for professions are gender specific, with "in" the female suffix.

This last entry is arguably more predictive than reactive, with less than 10 percent of board positions occupied by women in Germany's top-listed DAX companies. Merkel's government and the opposition are both considering a quota to bolster these numbers, although they differ on details like the desired level and timeframe.

Duden has had a rather torrid time of late, moving its offices from Mannheim to Berlin and restructuring the company - a move that led to many layoffs. The latest edition is supposed to draw a line under this transition, and is also the company's first "all-in-one" dictionary, available in print or as a computer download or smartphone "App."

Duden boss Marion Winkenbach said she did not expect this modernization to put the classic dictionary out of print. "It's a tool like a knife and fork," she said of the hard copy. "Everyone's got one at home."