A German company -- in an ultimate act of retro defiance -- has announced its plans to produce nicotine-laced beer. Bars and restaurants may soon see decreasing levels of nervous finger-tapping and panicky lip-biting. 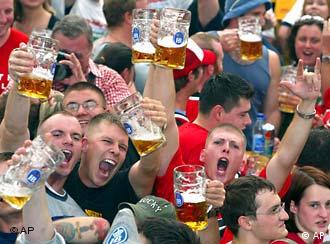 In many countries, smoking bans in bars and restaurants are turning heavy smokers into an army of forlorn neurotics. Forced to separate their alcohol and nicotine addictions and ostracized from their favorite bars, smokers are nowadays congregating on the streets. There, they expose their feeble -- though defiant -- bodies to the cruelty of the elements as well as the despising, self-righteous looks of the ubiquitous health freaks. 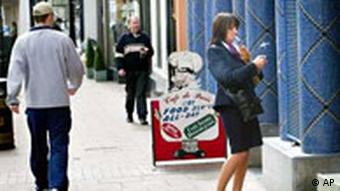 Barred from smoking inside a bar.

No matter how many times they tug their ears, fiddle with their keys, pull their sleeves or check the time on their cell phone -- which, incidentally, they tend to forget immediately, so that they have to keep checking, continuously and indefinitely -- smokers are banging their heads against the "no smoking" signs all over the world and asking the same question: Why, oh why, does life have to be so unfair?

But all that may soon be history.

Drinking and smoking -- a match, apparently, made in heaven, but not heavily advertised by world religions -- is about to experience a new, post-prohibitive reincarnation in the shape of NicoShot, a nicotine-laced beer.

A German beer producer, Nautilus, has announced that it is currently testing NicoShot, a beer containing 6.3 percent alcohol and three milligrams of nicotine per bottle.

"Many countries have a smoking ban in bars and restaurants," a Nautilus spokesperson said. "With our beer, you won't have to go outside for a quickie."

Hosanna, Nautilus! Smokers all over the world will be grateful. But isn't nicotine addictive? Won't stuffing nicotine down the beer drinkers' throats simply encourage a new generation of smokers to trade yellow teeth for beer bellies and bad hangovers? 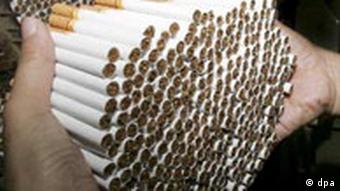 Nicotine may find its way back into no-smoking bars, albeit in a liquid form

The German company would beg to differ. In fact, it is hoping that NicoShot will help people smoke less.

"While NicoShot can lessen cravings, it is not a 'cure' for smoking," the Nautilus spokesperson said. "But it can help you make changes in your lifestyle without having to walk out of the bar for a quick smoke to deal with sudden withdrawal symptoms."

If all goes according to the plan and the nicotine beer takes off, smokers will experience dramatic improvements in the quality of their booze-bonding -- somewhere between the devil and the deep spew.

Germany lags behind in implementing an EU-directive prohibiting tobacco advertising. A law proposed by the government is not likely to make it past the upper house dominated by opposition parties. (Aug. 3, 2005)

Politicians want next year's World Cup smoke-free. More countries are banning smoking in public places, and tobacco advertising is on the decrease. The industry is starting to get worried. (Sept. 27, 2005)

Click here for a selection of best stories from DW-WORLD's series "And Finally..."