The restored Green Vault at Dresden's Royal Palace, one of Germany's most celebrated museums, was unveiled more than 60 years after World War II bombs reduced it to rubble. 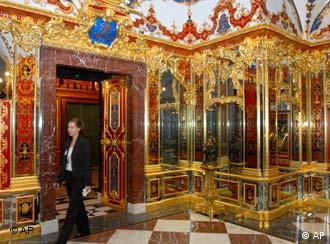 German Chancellor Angela Merkel was one of a number of guests on hand to at the official opening ceremony on Friday.

"This is a meaningful moment for our entire country, and a good day for Europe," she said, accompanied by France's European Minister Catherine Colonna. "More than six decades after its destruction in World War Two, one of Europe's most meaningful vaults has returned to its original location."

The Green Vault -- or grünes Gewölbe, as it is known to Germans -- was founded in 1723 by August II, the prince-elector of Saxony and little-loved king of Poland who collected rare, glittering objects like Johann Melchior Dinglinger's 18th-century jewel-encrusted figurines titled "Court of the Grand Moghul of Delhi" and his "Golden Coffee Set."

Collecting instead of killing 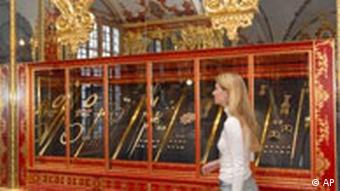 "With the long-awaited return of the Saxon prince-electors' and kings' Baroque vault to their first location has closed the worst wound in Germany' museum history," said Martin Roth, the general director of Dresden's state art collections.

The vault, named for the pale green hue of its domed ceiling, eventually housed more than 3,000 medieval, Renaissance and early Baroque works.

"The house of Saxony did not waste its time and money on wars, which it mostly lost anyway, but preferred to invest in great works of art," Georg Milbradt, the premier of the eastern German state, told journalists on Thursday.

The Green Vault's contents are the biggest surviving princely art collection in Europe but languished in relative obscurity behind the Iron Curtain for decades. The wealth of objects now back on display include an 18th century amber cabinet and theologian Martin Luther's ring. 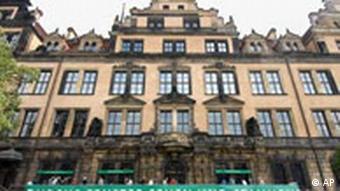 The works are spread out in 10 connecting rooms bearing the names of the materials the objects they showcase are made of and have been restored with photographs taken in 1933 used as a template.

The rooms bear the names of the materials the objects they showcase are made of, such as ivory, white gold and amber, and culminate in the domed "Precious Room." While the museum's walls are still marble, decorated with mirrors and gilt, the ceiling has not been painted green this time around.

Its treasures escaped destruction in the Allied fire-bombing of Dresden in World War II because they had been put into storage in a nearby fortress by the Nazis.

The collection was found by the Red Army before the end of the war and taken to Moscow, from where it was only returned to Dresden in 1958 and housed in Dresden's Albertinum fine arts museum since 1974.

In order to be sure the collection retains its impressive gleam, only 100 visitors will be allowed into the museum at once and all will have to pass through "dust doors," a type of airlock to keep out particles that could smudge the shine on the exhibitions' jewels.

In September 2004, a part of the collection was moved into the so-called New Green Vault, on the first floor of the palace, which was finally restored after German reunification in 1990, and attracted some 1.2 million visitors. The entire museum will open to the public on Sept. 15.

The aim behind Daniel Libeskind's architectural restyling of Dresden's Military Museum was clear: not another glorified weapons display. But the museum will have to find a new message before it reopens. (July 26, 2006)

Just days after UNESCO removed Cologne Cathedral from the endangered list of World Heritage sites, the Dresden Valley is placed on it. Plans to build a bridge threaten the valley's natural beauty, says the cultural body. (July 12, 2006)