After rumors of bad health and a conviction in absentia, DRC presidential candidate Moise Katumbi has kept out of the public eye for some months. In this DW exclusive, he expresses the need for a united opposition. 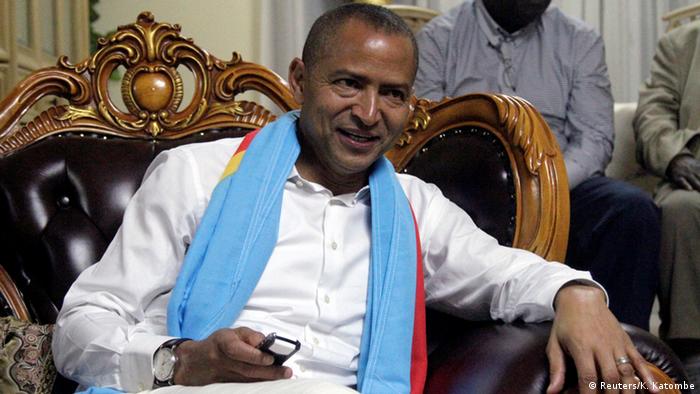 DW: Mr. Katumbi, there have been rumors about your health - it has been said that you were poisoned. Are you well enough to lead the Democratic Republic of Congo's opposition alliance against President Joseph Kabila?

Moise Katumbi: I can assure you that Moise Katumbi is doing very well. He has taken his combat back to his country, fighting for the respect of our constitution. I am telling you again. I still stand as a candidate for presidency of the Democratic Republic of Congo, and I will go all the way.

You talk of a monologue in Kinshasa. At the moment, a so-called "inter-Congolese dialogue" is taking place in the capital, overseen by the African Union and various other parties. How do you - as a political personality in DRC - view this dialogue?

As I said, this is a monologue. We are not against participating in a dialogue. But we will not accept what this monologue is bound to impose on us. Imagine a dialogue taking place in the absence of the main opposition candidate, Etienne Tshisekedi, in the absence of several political parties, in the absence of a veritable civil society. I don't know what kind of dialogue this is supposed to be! Even the Catholic Church has repeatedly pointed out that we need an inclusive process.

You also point to December 19: the date set as the end of Kabila's mandate as president, according to the constitution. Mr. Katumbi, what powers do you have to ensure that Kabila steps down on that day?

Starting from that day, Joseph Kabila will be illegally holding on to power. It is he who will have violated the constitution. He alone - and not the Congolese people - will be responsible for this transgression. The population has given two mandates to President Kabila. This very population will take the power from him.

Are you telling the population to take to the streets while Kabila has the army behind him?

The army doesn't belong to one man. If we are asking the population to take to the streets, it is to ensure that the army will one day receive their due pay. Today, they are in a miserable constitution.

Your main support today is the population?

It is the population.

If Kabila were to ask you to take part in the dialogue, would you? It would be an inclusive dialogue.

I will not go if the condition we set - to free all political prisoners, call off the cases against them and refrain from arresting the people of DRC - is not granted.

What do you say to the women grieving their loved ones in Beni, the young people who have no access to quality education, all those people who don't have access to drinking water and medical services? What is your plan?

First of all, rule of law must be restored. And the powers must understand to invest in the right places, invest in the population. This means to solve the issues concerning energy, health, education. On top of that, we need a middle class, we need to boost local production. This is what I did as governor of Katanga. The DRC can manage a new start. Within two or three years, the people will witness major changes.

Many people consider you to be a Trojan horse. You were in government, like Vital Kamerhe, and now you are changing affiliations and telling us what went wrong in government.

I was in the ruling coalition, I admit. No one can deny it. But, in government, "Moise Katumbi" was impeccable. My track record is there. If President Kabila had remained true to the constitution, I wouldn't have left the ruling coalition. Are you telling me that in that coalition there is no one who would be capable of taking over from Kabila? There are people who could do that. I was courageous enough, I took a chance and closed the door on him - and for a good reason: in order to save our country, the DRC.

The problem starts with the way elections are prepared. The biggest army is the people. If you want to win elections, you need an opposition that stands united. To understand what is happening around us can help us ensure that such a scenario doesn't repeat itself in the DRC. We are going to be very careful not to fall into that trap - and so are the people.

Moise Katumbi served as the governor of Democratic Republic of Congo's Katanga province under Joseph Kabila for eight years. In 2015, he fell out of grace with the president and left office to form his own opposition alliance. Katumbi left the country for medical treatment in May and in June was tried in absentia and sentenced to three years in jail for real estate fraud - a fact that officially bars him from running for the presidency.

'Dialogue key for a peaceful election in DRC'

Opposition groups in the Democratic Republic of Congo plan to hold protests in the capital, Kinshasa, on Sunday against President Joseph Kabila's plans to extend his rule beyond his two-term limit that ends in December. (29.07.2016)

Veteran opposition leader Etienne Tshisekedi has flown home to DRC after a two-year absence in Europe. Elections are due in November with President Joseph Kabila barred from running for a third term. (27.07.2016)