A year into office, the government of Chancellor Angela Merkel is feeling the strain of low popularity. The past 12 months have been bumpy, with several resignations and disagreements between the coalition partners. 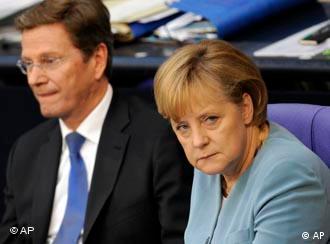 One year after Germany's Christian Democrats (CDU) and liberal Free Democrats (FDP) reached a deal to form the country's new coalition government, voter disaffection with the CDU-FDP union was at a high.

According to results of a Stern-RTL poll released Wednesday, only around 35 percent of Germans were satisfied with the work done by the government of Chancellor Angela Merkel, which won reelection last year in a narrow victory over their former "grand coalition" partners, the Social Democrats (SPD).

The poll noted a dramatic drop in support for the junior coalition partners, the FDP, to around five percent; The party had garnered nearly 15 percent of national votes in the September 27 election last year.

According to the poll, voters currently preferred a coalition of the SPD and the Greens, as the latter continued to record strong figures. Around 47 percent of Germans polled said they would prefer such a left-leaning government. 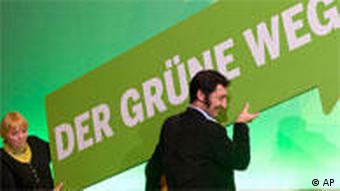 'The green way': The Greens have done well in recent polls

Previous German governments had managed to return to popularity after poor poll showings after a year into office, the head of polling institute Forsa, Manfred Guellner, told weekly magazine Stern. The SPD-Greens government of former chancellor Gerhard Schroeder was one such example.

Guellner added, however, that a drop in support for a junior coalition partner, as was being experienced by the FDP, was a damaging development for Merkel's government.

"Many FDP voters have been doubly disappointed," he said. "They switched from voting for the CDU to voting for the FDP, and now they're also turning away from this party in frustration."

The coalition government began its tenure under the strain of a global financial crisis that had seen the German economy in its worst downturn since World War II.

Following the election campaign, cracks emerged between the CDU and FDP when the liberals began squabbling with the Christian Democrats over key campaign pledges, such as tax cuts.

The year also saw a string of high-profile resignations within the CDU's inner circle, and high public discord over a eurozone debt crisis and the prospect of German taxpayers being made to bail out other countries in the monetary union. 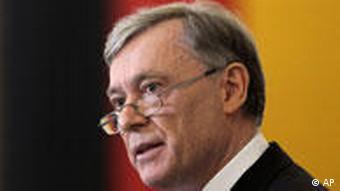 Koehler took the decision to step down from the presidency

Arguably, one of the biggest problems Merkel has faced since the election has been the resignation of six of 10 Christian Democrat state premiers or city-state mayors.

The CDU suffered a further blow earlier this year when President Horst Koehler left office following widespread criticism of a comment he made suggesting some German military missions abroad only served the country's economic interests.

Some accused Merkel's government of not rallying around the president, whose roots were with the CDU despite his non-partisan position of power.

And in August, further splits appeared over pension reforms when Merkel's economics minister, Free Democrat Rainer Bruederle, took a swipe at the chancellor, labeling the lagging pace of the reforms as disappointing.

Foreign Minister Guido Westerwelle, the vice chancellor and head of the FDP, has attempted to put a positive spin on the last year: "It's my observation that the economy has grown, and unemployment has dropped," he said recently.

He said the government had performed well on matters of security and civil rights, and also "substantially well on reforms to the social security system."

That doesn't appear to be enough for voters.

German Chancellor Angela Merkel has blamed public bickering for her coalition government's low approval ratings. Merkel said that a change was needed in the way members of her government behaved. (23.08.2010)