More than a dozen people died as machete-wielding rebels attacked a town in the Democratic Republic of Congo. Public health operations to tackle an Ebola outbreak that has killed 100 people were halted due to the unrest. 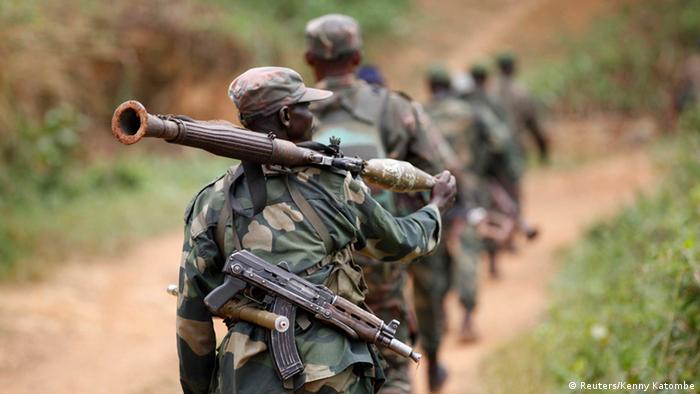 An attack on the town of Beni, in eastern Democratic Republic of Congo (DRC), killed 18 people and disrupted local efforts to contain the current Ebola outbreak in the area on Saturday night. The assault is believed to have been led by rebels of the Allied Democratic Forces (ADF).

DRC troops clashed with the rebels in Beni, a city of several hundred thousand residents, where four soldiers were killed. Witnesses described hearing heavy and light caliber gunfire for several hours into the night, while groups of rebels were seen slashing victims with machetes.

Congolese military official Mak Hazukai confirmed the attack and told AFP news agency that "the territory and the city of Beni are facing ADF terrorism, whose command structure is led by Ugandans."

The ADF militia was initially created by Muslim rebels to oppose Ugandan President Yoweri Museveni, but it has spread its operations into the DRC's North Kivu province, a hotbed of armed rebellion and ethnic conflict since the late 1990s.

Read more: Congo: On the campaign trail in an African war zone

Community unrest followed the attack in Beni and prompted the Health Ministry to temporarily suspend its efforts to contain the current Ebola outbreak, highlighting the challenges authorities face in dealing with a public health emergency in the unstable region.

"Many inhabitants of the town of Beni took to the streets this Sunday to protest against the growing insecurity in the zone. The field work of the response will resume once calm returns to the town," the ministry said in its daily Ebola report.

One hundred people have died from the current Ebola outbreak in the DRC, the Health Ministry said on Sunday, as authorities have struggled to contain the disease in North Kivu.

The latest cases of the deadly virus began emerging shortly after the country's government had declared an end to a previous outbreak in the western part of the country.

Health officials have said they will begin administering an experimental vaccine following a new Ebola outbreak last week. The drug was previously successful in containing an outbreak in the northwest of the country. (06.08.2018)