Armed men have broken into a jail in eastern DR Congo and released almost all the prisoners. The local mayor said an Islamist militant group was behind the attack. 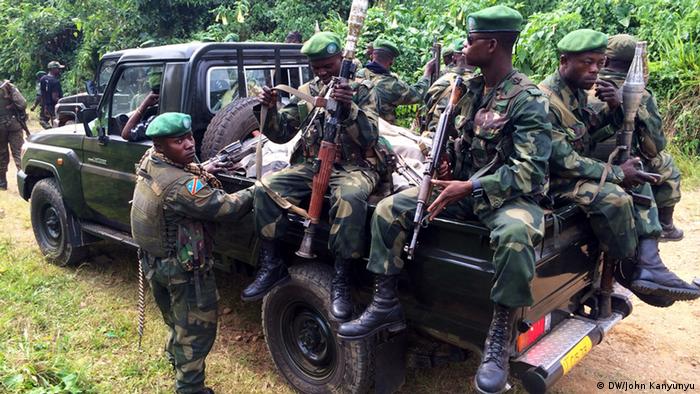 More than 1,300 inmates escaped from a prison in Beni, in eastern Democratic Republic of Congo, during an early morning jailbreak on Tuesday, authorities said.

The town's mayor, Modeste Bakwanamaha, said a large group of armed men managed to break into the Kangbayi central prison using welding equipment. By the time the operation was over, only about 110 of the 1,456 prisoners were left behind, he said.

"Unfortunately, the attackers, who came in large numbers, managed to break the door with electrical equipment," Bakwanamaha told the Reuters news agency.

Two inmates were shot dead during the assault, police said on Twitter.

Bakwanamaha said around 20 escapees had returned to the prison, and urged local residents in Beni not to protect those who were still on the run.

"We believe that it is the ADF who did this," he added, referring to the Allied Democratic Forces.

The Islamic State group said fighters from its Central African Province branch were behind the attack. The militant group has claimed responsibility for ADF attacks in the past, although UN experts have found no evidence the two are linked.

The ADF is an Islamist militant group from neighboring Uganda that has been active in eastern DR Congo since the 1990s. According to the UN, the group has killed more than 1,000 civilians since the start of 2019.

Residents said they feared more attacks after the jailbreak.

The breakout "further dashes any hope of justice and truth over the killings in the region," it said in a statement.

Jailbreaks are frequent from DR Congo's overcrowded prisons. Most of them were built before the country won independence from Belgium in 1960.

More than 900 inmates escaped from the same Beni prison in June 2017 after an attack by unidentified assailants, according to authorities at the time.

The month before, hundreds of prisoners managed to escape the main Makala prison in the capital, Kinshasa.

They included Ne Muanda Nsemi, the self-styled prophet of a separatist sect blamed for deadly attacks in the country.

Police arrested him in April after three years on the run.