Dozens of survivors of a shipwreck off the coast of Italy that killed hundreds of African migrants have protested a funeral for the victims after authorities refused to grant them access to the ceremony. 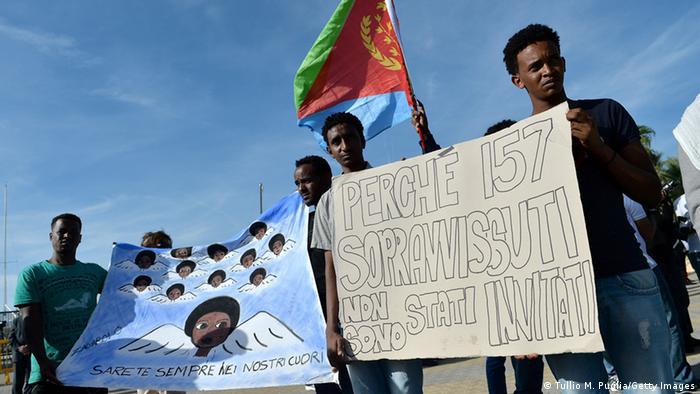 The survivors of the deadly sea disaster had originally tried to take a ferry from Lampedusa to the Sicilian city of Agrigento, the site of an official memorial ceremony at Italy's southernmost point, 200 kilometers (125 miles) south of the island. When an Interior Ministry official refused them permission to board ferry, they instead held a sit-in Monday in front of Lampedusa's town hall.

"One of us lost three kids and his wife. We asked to go [to the ceremony] and we want to go legally, but they wouldn't let us," one migrant, who did not give his name, told SkyTG24 television. "We only want to bury those we lost at sea."

The Italian government had promised to hold a state funeral for the 366 people who were killed when a vessel carrying more than 500 migrants, nearly all of them from Eritrea, caught fire, capsized and sank on October 3 a few hundred meters from the shore of Lampedusa. The coast guard has cautioned that the death toll could rise to more than 400, with many bodies still unrecovered.

Around 2 million Syrians - 10 percent of the population - have fled their country. But they are far from alone in their lives in exile. DW looks at what the UNHCR has called the "great tragedy of this century." (18.10.2013)

Monday's ceremony was also held to recognize the victims of a second shipwreck just days later. At least 36 Syrian refugees were killed when an overloaded boat sank off the coast of Malta, though Maltese authorities said the final toll could be as high as 200.

Prime Minister Enrico Letta had promised state funerals for the October 3 victims during a visit to Lampedusa, but many were instead buried in various locations on mainland Sicily, often without proper identification and without relatives present.

Interior Minister Angelino Alfano rejected any criticism, however, insisting that "we looked after the survivors and gave a dignified burial to the dead."

Lampedusa's mayor Giusi Nicolini did not attend Monday's ceremony, criticizing the decision to hold it so far from the island. The mayor of Agrigento, Marco Zambuto, called it a "farce" and a "photo opportunity" for Alfano.

In Rome, about 350 Eritreans gathered to mourn the victims of the October 3 tragedy, praying, holding candles and a banner that read, "You will always remain in our hearts."

An estimated 32,000 asylum seekers have landed in Malta and Italy this year. Accordint to immigration charities, between 17,000 and 20,000 immigrants have died over the past 20 years making the journey across the Mediterranean, often on ships not suited for the journey.