Clashes between security forces and protesters have claimed several lives at anti-government protests. The rallies were largely linked to territorial disputes. 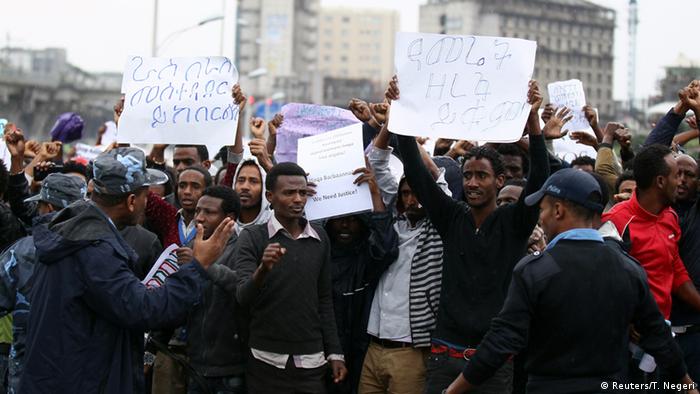 Dozens of people were killed over the weekend in violent clashes across Ethiopia in demonstrations that took place despite government warnings that it would take measures to stop them.

Some reports put the death toll higher, with a member of the opposition Oromo Federalist Congress telling Reuters news agency that more than 30 people were killed in the Oromia region alone.

"So far, we have compiled a list of 33 protesters killed by armed security forces that included police and soldiers, but I am very sure the list will grow," said Mulatu Gemechu, the party's deputy chairman.

Rights group Amnesty International put the death toll at nearly 100, saying police had shot 30 people dead in the city of Bahir Dar, in addition to the 67 who the group says were killed in clashes throughout Oromia.

For months, the region was plagued by unrest over plans by the government to expand the territories of the capital, Addis Ababa, into Oromia farmland. Although the proposal was shelved in January, protests have continued over the jailing of people arrested in earlier massive demonstrations against the plan.

Gemechu said the deaths took place in at least 10 towns in the region, including Ambo, Dembi Dolo and Nekemt - all towns that were at the epicenter of previous protests.

The government announced on Sunday that seven protesters also died in Bahir Dar. Protesters were demanding that the Wolqayit area in the Tigrary region be restored to the Amhara administration.

Violent clashes had erupted last week over the arrest of members of a committee set up to supervise the reinstatement.

Anonymous witnesses speaking to The Associated Press said that hundreds staged a rare anti-government demonstration on Saturday in the capital as well, with riot police using force to disperse the crowds, who were calling for political freedom.

The government blocked access to the internet throughout the weekend, alleging that "anti-peace elements" based outside the country and supported by online activists were fomenting the violence.

Rights groups have often accused Ethiopia of suppressing freedom of opinion. The West sees the country as a valuable ally against Islamist militants in neighboring Somalia.

At least 10 people have been killed in Gonder northern Ethiopia in clashes as locals with security forces. The government blames Eritrea for the unrest but residents cite disputes over land and ethnicity. (15.07.2016)