Many star athletes have been banned for doping and will be missing at this year’s athletics World Championships in Moscow. Those who will take part are on the defensive to protect their image. 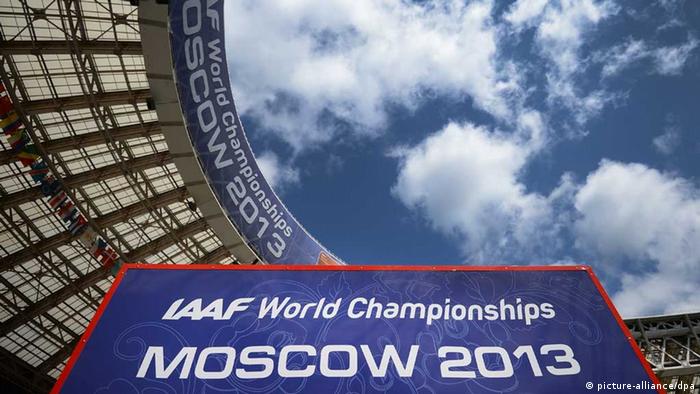 A record 1,974 athletes from 206 countries have entered the 47 events in Moscow, but doping and injuries have deprived the year's biggest single sports event of several top attractions.

Germany is sending 67 athletes and is hoping to do well right at the start of the competition in the decathlon.

“To win a medal right at the start would be a great beginning,” said Clemens Prokop, president of the German athletics federation (DLV), with European decathlon champion Pascal Behrenbruch in mind.

Another German hopeful is Olympic and world discus champion Robert Harting, who wants to defend his title for the second time.

“We want to maintain the level of success we had at the London Olympics 2012,” Prokop said. There the German track and field athletes won eight medals.

The 100-meter sprint events will be among the first of the championships. There world record holder Usain Bolt will face little competition, as world champion Yohann Blake is still nursing a hamstring injury.

But Bolt's main rivals have all been banned for doping: Jamaican Asafa Powell and US sprinter Tyson Gay have to stay at home, leaving former doping offender Justin Gatlin as the main challenger.

Doping has also stopped two more members of the Jamaican sprint team in the form of three-time Olympic and defending champion Veronica Campbell-Brown and Sherone Simpson.

Bolt himself pleads innocence, and has his eyes firmly on the medals. "I want to win three golds," he said. The six-time Olympic champion also announced that he intends to set a new world record for the 200 meter sprint: "If only to see whether it is actually possible to run under 19 seconds."

Before the beginning of the championships, the International Association of Athletics Federation (IAAF), the world athletics' governing body, has plans for the "most comprehensive anti-doping program in the history of the 30-year-old event."

It has already tested the entire Jamaican team for doping, including Usain Bolt.

"Usain Bolt is clean - most sprinters who run under 10 seconds are clean," Lamine Diack, president of the ruling body IAAF, told the dpa news agency.

"I do not believe that any doping issue 'severely damages' either the world championships or the sport of athletics because we are completely committed to fighting doping and have been at the forefront of the fight against doping for decades now," he said.

The IAAF announced that in-competition urine tests would be carried out for the top three finishers in each event immediately after the race. In addition, some athletes would be targeted for testing and others tested by a random draw. A total of between 450 and 500 urine tests will be carried out during the Moscow championships. “This will allow the testers the possibility to detect for substances such as EPO," the IAAF explained.

The current sanction for a first-time doping offender is two years.

“It is reassuring that so many athletes have been found out ahead of the competition,” Clemens Prokop commented. “That indicates that the athletes who do take part are probably clean.”

He went on to add, however, that "after the Dieter Baumann incident, I wouldn't vouch for anyone anymore.”

Dieter Baumann was a German 5000 meter champion in 1992. He later tested positive for Nandrolon and was banned from 2000 Sydney Olympics, although he had argued that someone else had contaminated his toothpaste.

A large number of athletes have had to cancel as well. The London 2012 women's heptathlon medal winners Jessica Ennis-Hill (Britain), Lili Schwarzkopf (Germany) and Tatyana Chernova (Russia) are out due to health reasons. Croatia's star high-jumper Blanka Vasic has an injured foot, and Ariane Friedrich has torn her Achilles tendon, as did javelin world champion Matthias de Zordo.

Injuries are common in a post-Olympic season, as many athletes struggle to return to top form.

Those who are healthy and unaffected by doping bans will be keen to take the opportunity to bag some prize money. Every singles event winner will receive $60,000 (45,000 euros), and the relay winners will get to divide up $80,000 in addition to the medals. US athletes are expected to take home the lion's share of the prize money, but the Russians also have high hopes. Despite the doping scandals, which have also affected many Russian athletes, attendance is expected to be high: More than 80 percent of the tickets have been sold, and the opening weekend events have been sold out.

Russia is set to host a series of major sports events, with the 2014 Sochi Winter Olympics and the 2018 football World Cup to follow.

American 100-meter record holder Tyson Gay has tested positive for a banned substance. The 30-year-old said he would pull out of next month's world championships in Moscow. (14.07.2013)

A report on doping in the former West Germany has been published after details emerged that the practise was widespread and covered up for decades. The document indicates that there had been collusion at a high level. (05.08.2013)