Royalty-obsessed Germans are getting a kick out of the troubled wedding preparations for Britain's Prince Charles and Camilla Parker-Bowles. German tabloids have jumped at the chance to ridicule the Brits for a change. 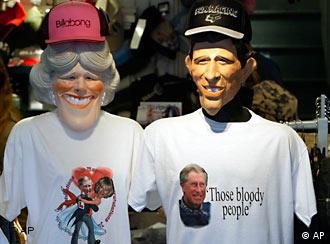 Camilla and Charles haven't had much to smile about lately

"Don't mention the war." British comedian John Cleese's famous line from "Fawlty Towers" has long been a synonym for jokes about uptight Germans. But now, the "Krauts" seem to have found a way to get back at their British tormentors for decades of humorous abuse.

"Those crazy Brits," wrote German mass-tabloid Bild in its Thursday edition, citing a News of the World "interview" conducted by a psychic with the late Princess Diana. It appears many Brits believe that Diana is jinxing the nuptials from beyond the grave.

They can hardly be blamed as the bad news about the wedding of the British heir to the throne and his long-time mistress just doesn't stop. 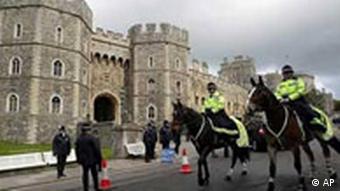 Security at Windsor has been stepped up ahead of the wedding

On Thursday, yet another glitch became public as British tabloid The Sun revealed that one of its reporters had managed to sneak into Windsor Castle with a fake bomb. Posing as a delivery man, he drove around the grounds in a van without anyone checking his cargo, which included a brown box marked "bomb."

London's Metropolitan Police, responsible for guarding the royal family, launched an "immediate inquiry" into the embarrassing breakdown in security, the second at Windsor Castle within two years. 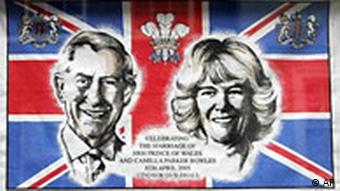 Friday's funeral for Pope John Paul II was perhaps the biggest hitch, as the wedding was originally supposed to take place on the same day. However, Charles agreed to postpone the vows one day and travel to Rome to attend the Catholic leader's funeral -- a move described by some as one of the greatest ironies in the relationship between Britain's monarchy and the Catholic Church. After all, it was King Henry VIII who broke with the pope in order to be able to marry a divorcee.

As a result of the postponement, the royal party -- devoid of many of Europe's crowned heads who have all excused themselves -- will now have to rush out of Windsor town hall after the ceremony as several other couples are to wed there later in the afternoon. Town officials refused to move the other weddings.

Of course, that wouldn't have been a problem had Charles and Camilla been able to marry at Windsor Castle as they originally wanted. But even those plans had to be changed because under English law, licensing the castle for weddings would have opened it as a venue to commoners for the next three years. 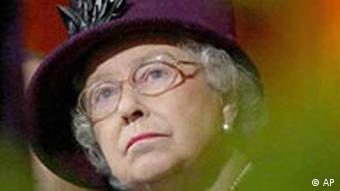 Queen Elizabeth II, who will not attend the civil ceremony, is reportedly also upset about the date change as her mother was buried three years ago on April 9.

And weather-wise, things don't look so good either: According to meteorologists, the couple will face heavy winds, rain or even snow and temperatures around six degrees Celsius (42.8 degrees Fahrenheit).

Last but not least, Charles and Camilla might have to interrupt their honeymoon on April 15, as the queen could ask her son to represent her at the funeral of Monaco's Prince Rainier III, who died on Wednesday.

DW-WORLD recently reported on UN reform plans and the upcoming wedding of Prince Charles and Camilla Parker-Bowles. Our readers shared their views on the topics. (April 6, 2005)

Queen Camilla? No, Thank You

Charles and Camilla Set to Wed

Britain's Prince Charles and his longtime companion Camilla Parker Bowles are to marry, putting the official seal on a relationship that first blossomed 35 years ago. (Feb. 24, 2005)