'Don't be afraid if your children come home as hackers'

At the biggest convention of hackers in Europe - organized by the Chaos Computer Club - there are hacking course for youngsters. What do they learn? Educator Daniel Seitz says it's more benign than you might expect. 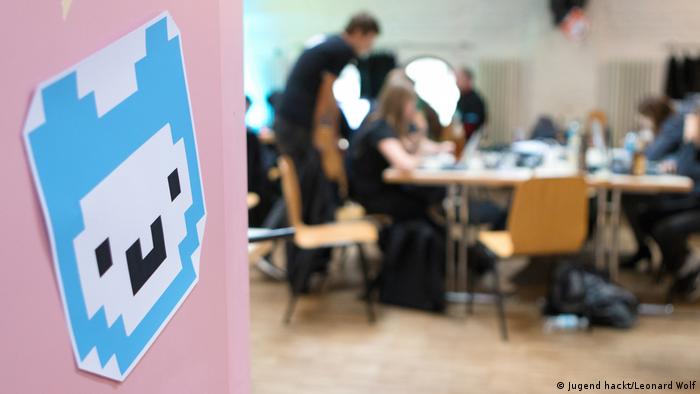 Deutsche Welle: What is Jugendhackt?

Daniel Seitz: "Jugendhackt" is a program for young, technically gifted people. "To code a better world" is our motto. We stage regular events, which give youth people aged between 12 and 18 the opportunity to tinker around for a better world alongside kindred spirits.

So that means you're not so much a club as event organizers. How regularly do these events take place?

This year there were eight events in all. Five of them were in Germany, one was in Austria, one in Switzerland and one in South Korea at the invitation of the Goethe Institute. That's a record for us, but when you look at it from the point of view of what these young people need, it's far too few.

And these events are called "hackathons"?

Exactly. But we hardly ever use that term ourselves. Those who have already been to a hackathon know what it means, but most other people have no idea. It's also important to reach out to new young people, including those who are not so enthusiastic about technology. With a word like "hackathon," that doesn't work.

Can you give us an idea of what happens at hackathons?

As a rule we start with a short input session about several general topics, and we focus on a particular topic. Then, we go to brainstorming. The young people develop their own prototype ideas and then realize them as part of a team.

Over the course of the weekend they work with our mentors who can, on the one hand, give them tips but far more importantly make sure that their proposals stay in the realm of the feasible and that the participants don't spend the whole weekend thinking about some utopian project. 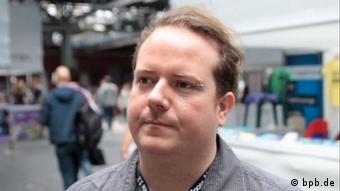 That's quite abstract. What might be the topics for a weekend? And what are the results?

At our main event in Berlin we most recently had the topic "Borders in the Head." After we chose "Refugees Welcome" the previous year - in general keeping with the culture of welcoming refugees - we wanted again this year to look at personal responsibility and also at the racism that we might carry inside us.

We wanted to direct young peoples' focus so they didn't just look to shift their own responsibility, so that they weren't just developing another platform and thinking about the big solutions. We also wanted them to think about it in a closer sense. How can they contribute, and are they perhaps a part of the problem? Where have they themselves propagated racism.

And what exactly came out of that?

A good example was a sort of "Tinder" against racism. The idea was basically to bring people together who were each very different when it came to racism. It's possible to log into the platform via a questionnaire and put it out there in a chat room with someone who has a very different attitude. That prevents people from always moving in the same circles as those who think in a very similar way. There was the idea that you could meet someone completely different and so gain a new perspective. That way, at the same time, you can think about your own habits and attitudes.

So parents don't need to worry that their children are going to come home as hackers?

That, unfortunately, is down to the somewhat skewed term "hacker." Hacking, for us, means the creative use of technology and not the term, hacker, as it is often used in the media; which is all about somehow illegally breaking into systems, or any other kind of illegal activity.

The use of the term "jugendhackt" is therefore very deliberate, because we want to counter this false impression.

In fact, the parents may be pleased if their children come home from the weekend as hackers. They would then also be aware of the responsibility that goes hand in hand with the use of technology.

We are happy that the kids leave here and don't just take the first turning - to programming manipulation software. Instead we also want them to bear in mind their professional careers; their capability for making an impact and to be able to avoid the wrong decision in cases of doubt.

Such (malicious) software can obviously implicate large organizations. But, on the small scale, someone or other has written the software and someone has agreed to implement these multi-million dollar frauds. We hope that those who have taken part in our program would make the right decision at a moment like that.

What types of kids take part?

It really is a mixed bag. We are happy that we also always have absolute beginners with us. They have found us and want to be there because of the topic. It's really not a problem as we have a relatively large number of mentors who closely accompany such beginners. At the other end it can be that our youngsters are able to work with some crazy programming languages that are difficult so that its difficult for us to have enough mentors to work with them.

Many of them, at the age of 14, 15 and 16, are already so advanced in their abilities that they surpass what the adults are able to do.

What's also important is to look at what they are already able to do, what they have taught themselves. There are, unfortunately, no social setting where you can say you learn this from an early age. The certainly don't learn it at school and there is very little on offer outside school that encapsulates what is socially interesting, even in the most limited way.

Young people have the internet, which is fantastic. They are already way ahead of the hackers of 20 years ago because they have so much access to information. But society and the education system do not address this need that young people have.

Do you notice an increase in interest from young people?

Yes, absolutely. We started with 60 young people in 2013, and we were immediately at full capacity. By the fourth year we had nearly 500 places, but were still a long way short. We had significantly more applications than we could cater for, even though we deal with a relatively advanced target group. That means, especially at beginner level, there is still a lot of demand.

Daniel Seitz is a media educator and pedagogical director of "Jugend hackt", a program for the promotion of newcomers to progamming in German-speaking countries.

The interview was conducted by Hannah Fuchs

Can the state collect the data of its citizens in the name of security? Can citizens encrypt their data to combat such an intrusion? Europe's largest meeting of hackers debates the issues. (29.12.2016)

Germany's Chaos Computer Club is holding its annual congress - and 12,000 online activists have gathered for Europe's largest hacking conference. They accuse Google, Apple and Youtube of limiting access to information. (28.12.2015)