Donald Trump urged his supporters to remain calm and peaceful in his first statement after being impeached. He also said those responsible for the Capitol riot will be "brought to justice." 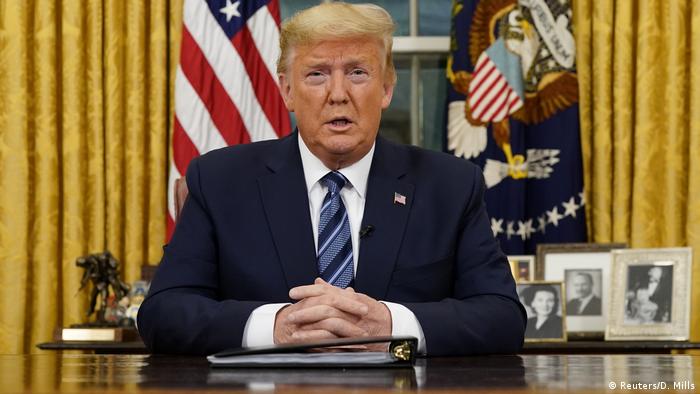 Donald Trump was impeached by a 232-197 vote in the US House of Representatives.

US President Donald Trump condemned the violent attack on the Capitol building last week and urged Americans to be united in a video released on Wednesday, hours after being impeached for "incitement of insurrection."

"I want to be very clear; I unequivocally condemn the violence that we saw last week. Violence and vandalism have absolutely no place in our country and no place in our movement," he said in his first remarks since the House of Representatives voted to impeach him for the second time.

"No true supporter of mine could ever endorse political violence," Trump said, adding that those involved in the riot "will be brought to justice."

"There is never a justification for violence. No excuses, no exceptions: America is a nation of laws," he said, calling on his supporters to remain peaceful amid concerns of further unrest ahead of President-elect Joe Biden's inauguration.

The president said that he had directed federal law enforcement agencies "to use all necessary resources to maintain order in Washington DC."

No mention of impeachment

Trump's video was released at the same time US House Speaker Nancy Pelosi was signing the article of impeachment against him.

"Today in a bipartisan way the House demonstrated that no one is above the law, not even the president of the United States," the top Democrat in Congress said at the signing ceremony.

The president did not mention the impeachment, which he had referred to earlier this week as the "continuation of the greatest witch hunt in the history of politics." 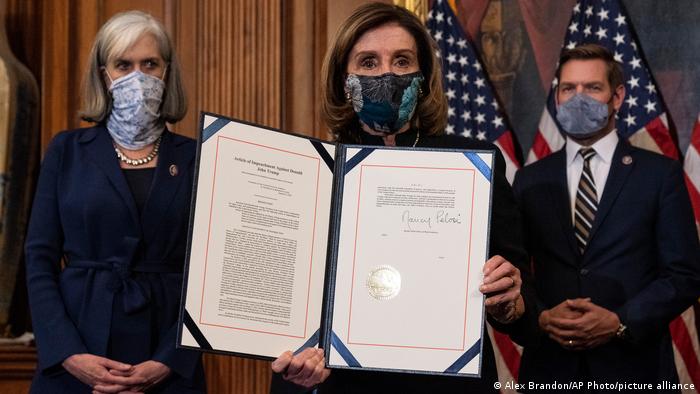 US House Speaker Nancy Pelosi signed the article of impeachment against Trump.

Trump was impeached by a 232-197 vote in the Democratic-controlled House, becoming the first US president to be impeached twice.

Ten Republicans also voted in favor of the impeachment in a sign of the president's loosening grip on the party he had dominated since 2016.

The article of impeachment will now go to Senate for a trial, which is likely to be held after Trump leaves office on January 20.

The president, stripped of his social media megaphone, also hit out at what he said was an "unprecedented assault on free speech."

"The efforts to censor, cancel and blacklist our fellow citizens are wrong and dangerous," he said. "What is needed now is for us to listen to one another, and not to silence one another."