US President Trump has lashed out at special counsel Robert Mueller one day after Mueller clarified why he did not charge Trump with a crime. Trump also refuted his own statement that Russia helped him get elected. 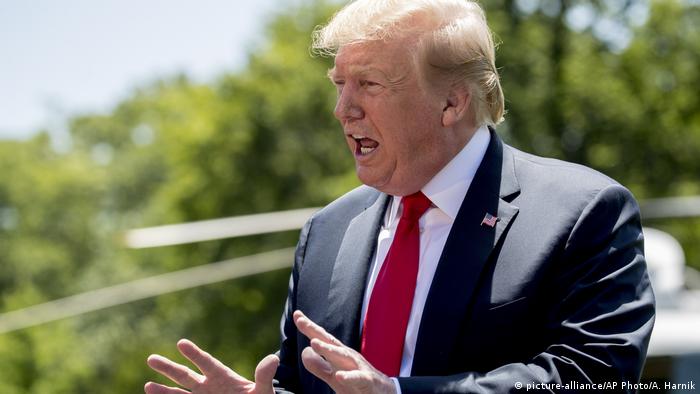 US President Donald Trump wrote on Thursday that he had been subjected to "the greatest presidential harassment in history," before asserting that the investigation, which he called a "witch hunt," has cost $40 million.

The tweet came in response to special counsel Robert Mueller's statement the day before. Mueller spoke, possibly for the only time, on his 488-page report into interference in the 2016 presidential election and explained why his office neither charged nor exonerated the president.

Mueller: We cannot charge the president

In his statement, Mueller did not comment on whether he thought the president had obstructed justice, but he made clear that "charging the president with a crime was not an option we could consider."

He went on to explain that this stance is based on longstanding DOJ policy that his investigation was obligated to respect as it was conducted under the department's umbrella.

Where the president got the $40 million number was also unclear, as financial statements submitted by Mueller's team show they spent only $17 million, with the highest estimate being $32 million once contributions by the Department of Justice (DOJ) were counted. However, this number is also controversial considering the probe uncovered at least $42 million in tax evasion on the part of Trump's former campaign chairman Paul Manafort.

Last week, Trump had said that the investigation cost $20 million.

After 22 months, Mueller's investigation ended with charges filed against three companies and 34 people, including six Trump associates. Evidence the special counsel gathered is also being used in 14 federal and state court cases.

Many saw Mueller's statement as a repudiation of Attorney General William Barr, who had declared that the report fully exonerated the president before its details were released to the public.

In a series of tweets, Trump wrote, "I had nothing to do with Russia helping me to get elected," then later he insisted that Russia hadn't helped him. Mueller said there had been systematic interference in the 2016 presidential election.

Mueller's statement reignited debate about whether Congress should charge the president with a crime, as the report said it could not fully determine whether Trump had obstructed justice.

While many Democrats have called for impeachment proceedings, House Speaker Nancy Pelosi has been hesitant. She did say on Wednesday, however, that "nothing is off the table" for Congressional committees seeking to investigate the president on corruption matters.

WHO: Poorer nations to get first 40 million vaccines next month 11h ago