Delegates at the Doha talks have agreed on the most important task at hand: an extension of the Kyoto Protocol. Mired in dissent, the UN talks aimed at tackling climate change had dragged on for far longer than expected. 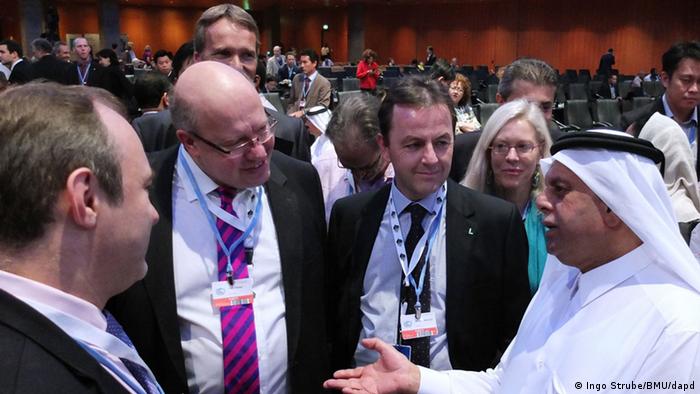 The Kyoto extension will keep existing climate targets until a new international agreement comes into effect in 2020. Kyoto's expiry would have left the world without a legally binding framework to confront global warming.

The two-week UN meeting in the Qatari capital had been scheduled to end on Friday, but the talks finally concluded late Saturday when the agreement was reached.

After a long night of negotiating, conference chairman Abdullah bin Hamad Al-Attiyah of Qatar called international representatives to a plenary session at which he urged them to consider a set of compromise agreements.

"I believe that this is a package that we can all live with and which is also good for our planet and future generations," he told the delegates from nearly 200 countries, including dozens of cabinet ministers.

Delegates must sign off on a new term for the greenhouse-gas curbing Kyoto Protocol as an interim measure to rein in climate change due to be agreed on by 2015 and entered into force by 2020.

Disagreements among negotiators in Doha have made it a struggle to wrap up the UN climate talks on time. And there is little optimism that the delegates will come to substantial agreements. (08.12.2012)

The 2015 deal would set goals for all nations, including emerging economies led by China and India that have no targets under Kyoto.

In a blow to the demands of developing nations for a clear timetable for a promised tenfold increase in aid to $100 billion (76.3 billion euros) a year by 2020, the draft deal merely agreed to put off decisions until 2013.

The draft deal would extend the Kyoto Protocol for eight years.

If it is not extended, Kyoto will expire at the end of 2012. It has already been weakened by the withdrawals of Russia, Japan and Canada. The United States never ratified it, and its backers, led by the European Union and Australia, account for just 15 percent of world greenhouse gas emissions.

World carbon dioxide emissions are set to rise by 2.6 percent this year, and are more than 50 percent higher than in 1990. Recent growth has come mostly from emerging nations, led by China and India.