The German President Joachim Gauck has opened one of the world's biggest contemporary exhibitions of modern and contemporary art in Kassel, central Germany. 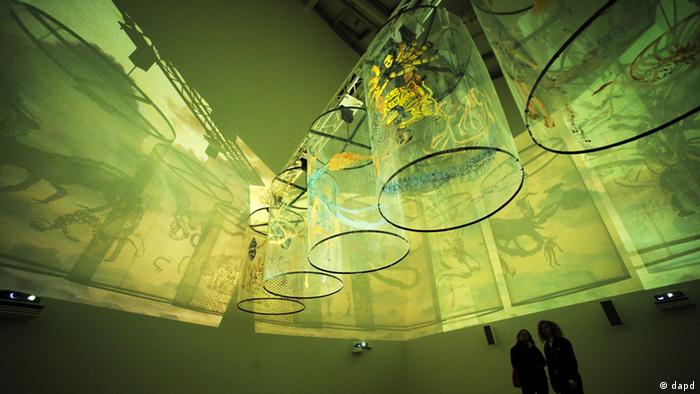 The thirteenth edition of one of the world's biggest and most ambitious contemporary art fairs opens in Kassel on the Fulda River in the northern part of the state Hesse in Germany.

Held every five years since 1955, the fair exhibits works by artists over a period of 100 days. This year's event features works by nearly 300 artists from 56 countries. Exhibits include cottages brimming with strange objects, sounds of the Brazilian jungle and a West African theatrical performance.

Artistic Director, Carolyn Christov-Bakargiev, a US-born Italian-Bulgarian, explained the festival's role at the opening: "dOCUMENTA is dedicated to artistic research and forms of imagination that explore commitment, matter, things, embodiment."

For this year's exhibition, she also chose historical artefacts as exhibits as well as a blackboard full of scientific formulas written by a quantum physicist from Austria. In doing so, she aims to show that "the boundary between what is art and is what is not becomes less important."

Standing for artistry at the service of fact there is a display over two walls of drawings of 372 apples done meticulously over many decades by German priest and activist Korbinian Aigner. Father Aigner bred fruit while interned by the Nazis at Dachau.

A key theme is that of collapse and recovery; appropriate for an event created to revive both the visual arts in Germany and the city of Kassel, which was devastated during World War Two.

In 1997, dOCUMENTA unveiled Chinese sculptor Ai Weiwei's, "Fairytale," a work which recognised that the Brothers Grimm grew up in Kassel. This exhibit brought the sculptor to international attention.

dOCUMENTA is one of Europe's top four top exhibitions, alongside the Venice Biennale, Art Basel and Monumenta in Paris. At least 750,000 people are expected to visit Kassel for the fair, which will go on until September 16. That exceeds the numbers for the Venice Biennale, which attracted 440,000 visitors in 2011.

Kassel is not the only venue for dOCUMENTA; this year a fifth of the works are being shown in other locations including Kabul, Afghanistan, Kairo, Egypt and Banff in Canada.