Indonesian searchers say they have detected ping signals, presumably from the flight recorders of AirAsia plane that crashed last month. So far, 48 bodies have been found in the Java Sea off Borneo. 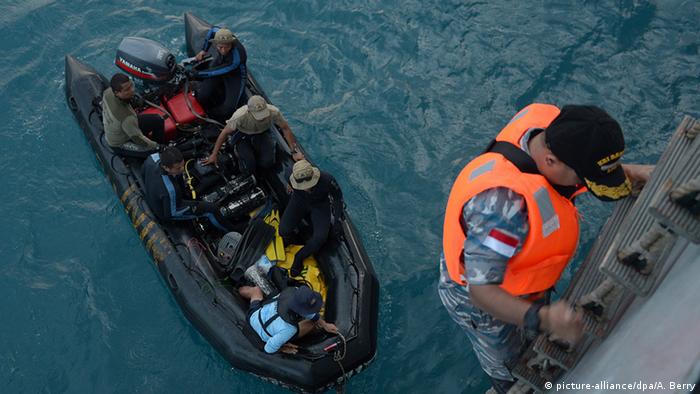 Indonesian officials said on Friday that divers were trying to locate flight recorders sending signals and thought to have detached from Flight QZ8501's tail section.

The tail was found on Wednesday, upturned on the shallow seabed about 30 kilometers (20 miles) from the last known location of the Airbus A320-200.

So far, stormy weather and strong currents have slowed multinational recovery efforts to recover the remains of the 162 passengers and crew on board.

Indonesian recovery teams took maritime lifting balloons by helicopter to the site on Friday ahead of an attempt to raise the tail to the surface.

The AirAsia flight vanished from radar screens on December 28, less that half way into a two-hour flight from Surabaya on the Indonesian island of Java to Singapore.

The news portal Detik.com quoted Indonesia army chief General Moeldoko as saying elite Indonesian divers were being sent "in the direction of the ping."

Indonesian Transportation Safety Committee investigator Santoso Sayogo said it appeared that the flight recorders were no longer in the tail section.

"Unfortunately it seems it's off from the tail, Sayogo said. "We have out fingers crossed it is the black box."

Cockpit voice and flight data recorders, if recovered intact, should provide investigators with key data to assess the cause of the disaster.

The flight vanished four minutes after its pilots had asked to climb from 32,000 feet (9,753 meters) to a higher cruising altitude to avoid storm clouds.

As recovery teams try to retrieve the flight recorders from the tail of the AirAsia plane that crashed into the Java Sea in late December, DW examines why air disasters keep happening in the region. (08.01.2015)