Diplomatic balancing act for President Morsi | World | Breaking news and perspectives from around the globe | DW | 14.09.2012

Egyptian President Mohammed Morsi faces a dilemma in light of protests at American diplomatic missions in Benghazi and Cairo. Meanwhile, demonstrations against the "Innocence of Muslims" film have spread world-wide. 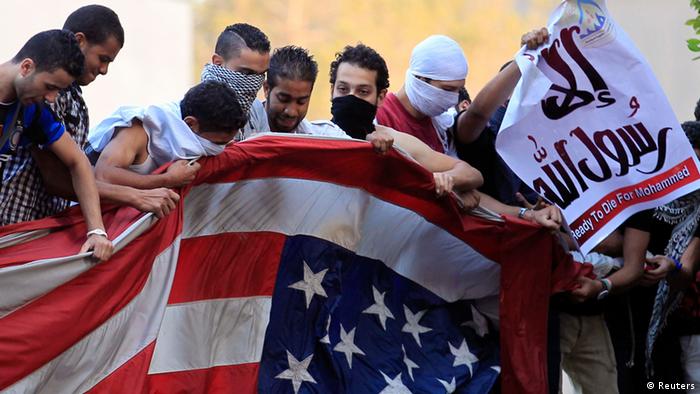 It's a mix of anti-police chanting by young soccer hooligans and religious slogans about the Prophet Mohammed that echo through Cairo's city center these days. Protesters throw stones at security authorities, while the latter use tear gas to try to force demonstrators toward Tahrir Square - and away from the American embassy. Hundreds of people have been demonstrating there since Tuesday against a movie in which the Prophet Mohammed is portrayed as a homosexual, among other things. The film entitled "Innocence of Muslims" was allegedly completed in July, but only just now was translated into Arabic and distributed on the Internet in a targeted fashion. In response, numerous Salafi groups in Egypt and in other countries of the Arab World called for protests.

Four American diplomats, including US ambassador to Libya Christopher Stevens, were killed following attacks on the American consulate in Benghazi Tuesday evening. Now there is talk that it was a terrorist attack planned in advance, with the film perhaps only serving as a convenient cover. One representative of the US government said there were indications that members of a militant organization called "Ansar al Sharia" - which can be translated as "Partisans of Islamic Law" - were involved in the attack.

Not all protestors have seen the film 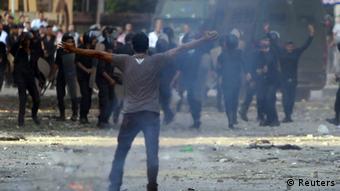 Protests at the US embassy in Cairo

"I'm here to defend my prophet and protest against the security forces, who are themselves Muslims, but are keeping me from speaking out," said 27-year-old Abdallah al-Masry, who has been demonstrating on Tahrir Square in Cairo. "Nothing has changed under the leadership of President Mohammed Morsi," he added. For many of the protestors, the issue is no longer just the controversial film, but settling old scores with the security forces.

It is primarily soccer hooligans who have been at the forefront in fighting security forces. The hatred is intense. Most of those now throwing stones have not even seen the "Innocence of Muslims" film. For them, it's the principle that matters, not the details.

President Mohammed Morsi is now faced with a dilemma: on the one hand, he evidently does not want to speak out against the protests because he would risk losing people's sympathy. Denigration of the Prophet Mohammed, after all, is taboo for any practicing Muslim. On the other hand, as president, he must guarantee the safety of foreign diplomats and their institutions. It's a diplomatic balancing act. 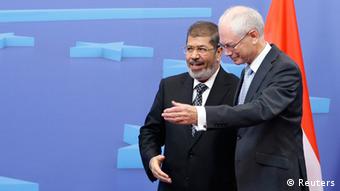 It wasn't until a press conference in Brussels on Thursday that Morsi clearly commented on the attacks at the US diplomatic institutions, condemning them and the killing of innocent people. Those who kill just one person, kill all of humanity, Morsi said, quoting the Koran. At the same time, he slammed the film. "We Egyptians reject any form of denigration of our Prophet Mohammed," he said. He affirmed that Egyptians have a right to peaceful protest and that Egypt is strong enough to protect foreign embassies and their diplomats.

Protestors are now demanding an official apology from the American government for the film, neglecting to consider that it is the product of a group of radical Islamophobes and is not sanctioned by the US government. 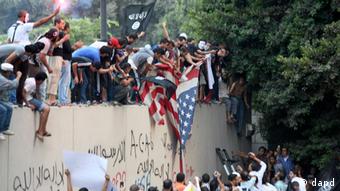 Protests have spread around the world

Egyptian media reports linking an Egyptian Copt, or Christian, residing in the US with the distribution of the film may be further contributing to tensions in the region. Five different charges have been made to the Attorney General on account of the film. The names of several Copts have been placed on the so-called "black list" - for them to be apprehended when attempting to enter Egypt and brought to trial. The Coptic Church of Egypt has itself condemned the film.

Meanwhile, Muslims around the world - from Pakistan to Gaza and Iraq - have demonstrated on Friday, September 14, denouncing the "Innocence of Muslims" movie. Egypt's Muslim Brotherhood has retracted its own calls for nationwide demonstrations in response to the film. "In light of the events of the last two days, the Brotherhood has decided to participate only in a symbolic protest in Tahrir Square, so that there is no more destruction to property, or injuries, or deaths, as has happened in the past," the group said in a statement.

Four Americans, including the ambassador to Libya, were killed when the US consulate in Benghazi was overrun. What looked like a protest over a film disparaging the Prophet Muhammad was potentially a planned attack. (13.09.2012)