The conflict parties in South Sudan may soon resume peace talks, including on negotiating an interim government. US Secretary of State John Kerry was in the country briefly for talks with President Salva Kiir. 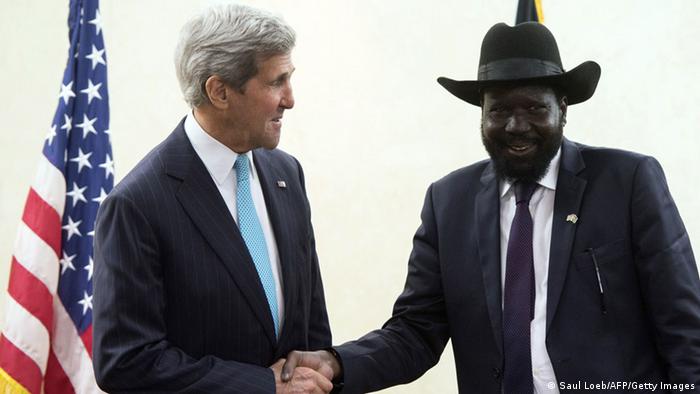 US Secretary of State John Kerry made a brief, unannounced visit in South Sudan, but he made sure to take the opportunity to express his concerns about the warring country's crisis to its president.

After meeting with Salva Kiir for around one hour, Kerry addressed the press with clear words, saying nothing less than the prevention of genocide is at stake in South Sudan.

Just a few kilometers from the president's office, at the University of Juba's campus, students seem to be going about their daily routines. In a country where armed conflicts have broken out repeatedly for the last 60 years, people have grown accustomed to living with daily uncertainty. Students pore over their notes in the shade of trees and wait for the next lecture.

Bloody clashes began in mid-December in Juba, but the capital has thus far been spared any major massacres. The fighting tends to flare up in individual districts in the city - often those near military bases or refugee camps. The civilian massacres are taking place in the oil-rich states in the nascent country's north.

The students in Juba are, however, following Kerry's moves very carefully. They know that their country is on the verge of slipping into deeper and deeper turmoil. The word "genocide" can be heard more and more often. Many hope that the worst case scenario can still be prevented, and they expect support from the West to achieve that end.

"We are crying out to them. We thought by this time, they would have helped us," said 20-year-old Stephanie, lamenting what she described as an unwillingness of the international community to bring South Sudan's leaders to reason. 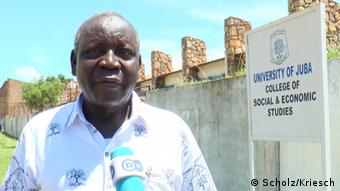 Simon Minoja, one of her lecturers and a respected South Sudanese conflict researcher, is far more skeptical that the West can do something to end the current conflict. He remembers well the euphoria that accompanied the founding of the world's youngest countries just three years ago. Along with his institute, he made the move from the Sudanese capital of Khartoum to Juba, the new capital.

At the time, the UN and a number of western development organizations wanted to put all they could into making the "South Sudan project" a success.

But Minoja says those efforts have failed to produce the kind of country they had envisaged. "If you go ... just outside Juba - a few kilometers away - you will not see the impact of their efforts. That's why people are so pessimistic," he said.

Even the optimists in the international community have had to accept the challenges at hand; in particular, this past December, when the power struggle between President Salva Kiir and his then-Vice President Riek Machar transformed into a bloody conflict.

Ever since, the conflict in South Sudan has been waged increasingly along ethnic lines. The president belongs to the Dinka ethnic group, while his rival is a member of the Nuer people. There have been thousands of victims on both sides of the war, and a million people have fled their homes. 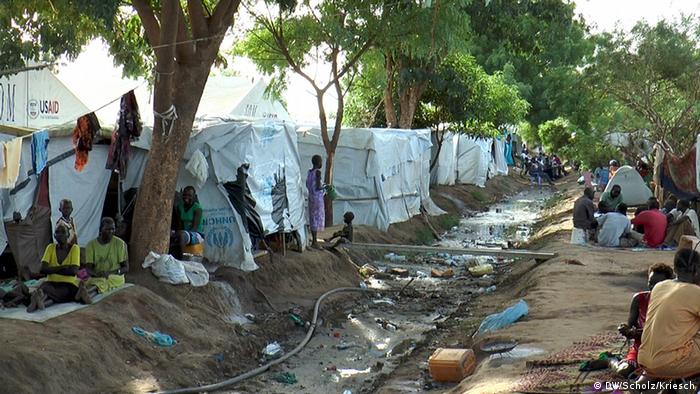 Behind closed doors, members of the UN mission in South Sudan discuss increasing instances of harassment. They say such actions are making it more and more difficult for them to fulfill their mandate of assisting in protecting the civilian population.

The forms of harassment range from hampering their arrival at airports to arbitrary arrests and interrogation by intelligence services. The speaker of the South Sudanese army, Philip Aguer, told DW that he no longer takes the international troops in his country seriously: "If you cannot protect yourself, then definitely you will not be able to protect the people."

During the meeting with Kerry, President Salva Kiir agreed to sit down for talks with rebel leader Riek Machar. However, in an interview with DW, South Sudanese Foreign Minister Barnaba Marial Benjamin seemed unlikely to compromise. He said "punishments or conditionalities" placed upon the South Sudanese government were unacceptable, adding that the central problem in the country were the human rights violations perpetrated by the rebels.

The prospect of successful direct negotiations, thus, is seen by most observers as dim - at best.

Peace talks between South Sudan's warring parties have resumed in Addis Ababa, while UN human rights chief Navi Pillay has arrived in Juba amid growing concern over the atrocities being committed in the war-torn country. (28.04.2014)