Dietrich Bonhoeffer: pacifist, religious reformer and victim of the Nazis

Seventy years years ago, the Nazis murdered Protestant pastor and religious reformer Dietrich Bonhoeffer at age 39. The man who said he truly came to faith in New York is still impacting the world's churches today. 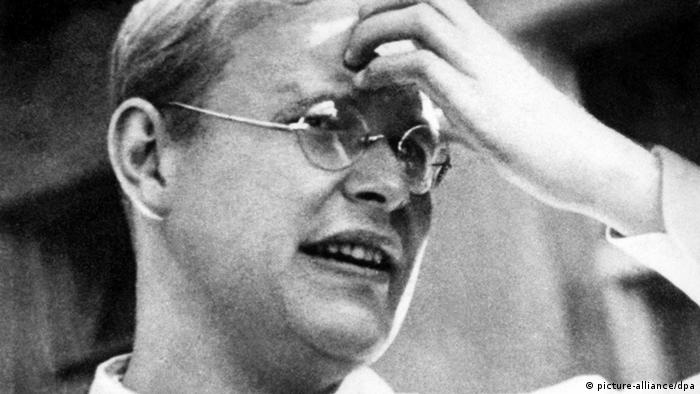 On April 9, 1945, at the Flossenbürg concentration camp in the Upper Palatinate, Dietrich Bonhoeffer was hanged - just one month before the end of the Second World War. As he climbed up to the gallows, the concentration camp doctor noted that he was "focused" and "intimately connected with his Lord." Convicted for treason, he was one of the last victims of the Nazi terror regime.

Bonhoeffer's Christian theology influenced the post-war period like no other of his generation. His dictum that the church was there for others broke with old tradition, where the church largely focused on itself. Bonhoeffer preached the presence of Christ in the world and laid the foundations for an interdenominational church image to which today both conservative and progressive theologian profess.

For him, faith meant following Christ fully, no matter what the consequences were. He also pioneered the proposition of a "religionless Christianity," which released God from the metaphysical paradigms of the past.

Preaching the presence of Christ 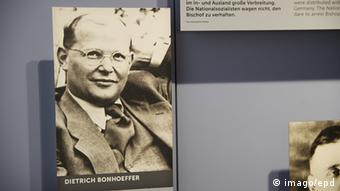 Dietrich Bonhoeffer has been called a 'Protestant saint'

Today Dietrich Bonhoeffer no longer splits the Protestant church as he once did. However, in 1953 the tone was gravely different.

Invited to a memorial service for Bonhoeffer, Bavarian Bishop Hans Meiser refused, saying Bonhoeffer did not die a martyr but instead died trying to overthrow the Nazi regime. Since then, Bonhoeffer's image in the church has change dramatically, with the former President of the Council of the Evangelical Church in Germany, Bishop Wolfgang Huber, calling him a "Protestant saint."

Born in 1906, Bonhoeffer grew up the sixth of eight children in Breslau (now Poland) and Berlin. His father, a renowned psychiatrist, was not particularly religious. Even Bonhoeffer's mother, a pastor's daughter, had little contact with the church. So it was somewhat surprising that in 1923 the then 17-year-old decided to study theology out of intellectual interest.

Bonhoeffer received his doctorate by the age of 21 and was a lecturer by 25 - an exceptionally rapid rise in the academic and theologian spheres.

However, it was on attending the Theological Seminary in New York in 1930 that Bonhoeffer's faith shifted. He became profoundly fixated on, and influenced by, the famous Sermon on the Mount and the notion of living in Christ's image. Bonhoeffer later wrote that "until New York I was a theologian but not yet a Christian."

The scholar many contemporaries had once considered arrogant suddenly was reborn as a campaigner for social justice and peace. His new credo: The church should be open to all, even non-Christian victims of every social order. He viewed Nazi Germany's rejection of the Jews as a rejection of Jesus Christ, who himself was a Jew.

In death as in life 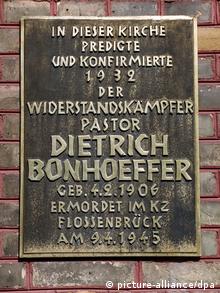 Bonhoeffer has no grave, but this memorial plaque hangs on a church in Berlin

Not wanting to be involved in the Nazi-influenced national church, Bonhoeffer moved to London to preach in 1933. Returning to Germany in 1935, he helped found the opposition Confessing Church in Finkenwalde before it was forcefully shut by the Nazi secret police in 1937. And in 1940 Bonhoeffer was silenced by an official Nazi gag order.

In the same year he joined the resistance group of Major General Hans Oster and his brother-in-law Hans von Dohnanyi and began his risky double life as a resistance courier and preacher of peace.

On April 5, 1943, Bonhoeffer was arrested for "undermining the military." In the Berlin-Tegel prison where he was confined he found time to read, write letters and poems and, most importantly, to work. After the failure of the assassination attempt on Hitler on July 20, 1944, the Gestapo uncovered documents indicting Bonhoeffer in the plot.

Six months later he was transferred to the Buchenwald concentration camp before being executed in another camp in Flossenbürg. According to a fellow inmate, Bonhoeffer reportedly departed with the words: "This is the end - but for me the beginning."

A conservative state in Germany is considering relaxing its ban on dancing during the Easter holiday. Nightclubs and event organizers are in favor, but the debate isn't music to the ears of German churches. (03.04.2015)

People all over the world are campaigning for the release of imprisoned Saudi Arabian blogger Raif Badawi. The first collection of his writings has just been published, and were edited by a former DW correspondent. (30.03.2015)

Opinion: German court ruling to allow headscarves for teachers means freedom for all