Researchers in Munich have developed a process to test agents in cells in a very short time. Their patch-clamp-technology is nominated for the German Future Prize. 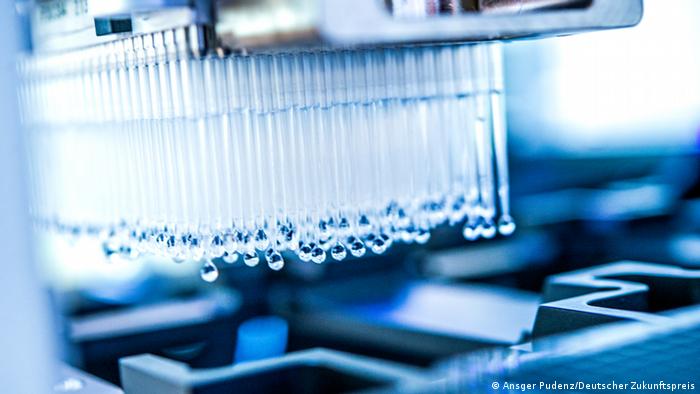 If your dentist hits a nerve with his drill, a pain signal is sent to the brain - unless you're on pain killers. If that's the case, the signal never arrives - the agent stops the electric transmission from penetrating the cell membrane.

The question of when a cell membrane lets electricity pass and when it doesn't is not only crucial for pain killers, but for many other drugs as well. Researchers from Munich have now gotten a process ready for the market that lets them measure very quickly how cells conduct electricity by using different agents. For this, they have been nominated for the "Deutscher Zukunftspreis," the #link:http://www.deutscher-zukunftspreis.de/en:German Future Prize#.

Cells conduct electricity via ion channels - proteins that decide whether the electric current can pass a cell membrane or not.

"Every cell in the human body has a large number of different ion channels that play a crucial role in the communication between the cells," physician Niels Fertig says. "These channels are important for the ability to conduct electricity and to transform electric signals into a certain stimulus."

Ever since his university studies, Fertig has researched these elongated trans-membrane proteins. When the ion channels malfunction, we get sick. "Drugs can subtly interfere by influencing the opening and closing of such channels, for example," he says. 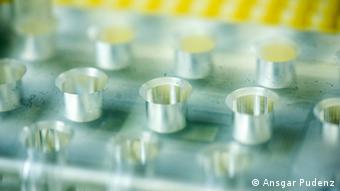 The cells are in a tiny pot. The proteins in their membrane are tested for conductivity

Influencing a multitude of diseases

Every cell type has different ion channels. Fertig estimates that up to 15 percent of all drugs on the market affect these channels. Apart from pain killers, this also includes heart medication or ataractics. Epilepsy and diabetes are also affected by ion channels.

That's why all agents that are supposed to enter the market need to be tested for possible side effects in relation to ion channels. This is how pharmaceutical companies can ensure a new drug doesn't trigger cardiac arrhythmia or other unwanted events.

But measuring ion channels is also necessary for finding new agents against diseases. It's not an easy task, though: "During the first try, hundreds of thousands, or sometimes more than a million, substances are tested," says Fertig. "Then the best ten thousand are selected - those that have some sort of effect. Then you keep on selecting, until the most interesting substance is found."

Until a few years ago, this could only be done by hand. A lab assistant had to use a pipette that conducts electricity to grab a specially bred cell and test it with agents - a time-consuming task. 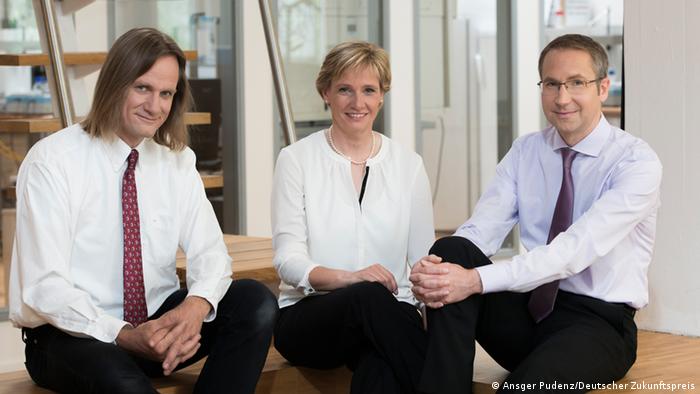 That is why Fertig and his two colleagues Michael George and Andrea Brüggemann, together with their company NANION have developed a robotic process, which can carry out tests roughly a thousand times faster.

Instead of a pipette the method utilizes chips made of borosilicate - 384 small fields are arranged like a chessboard on the chip. The fields contain a solution with cells of a specific type of ion channel.

Each field contains a tiny hole.

"This opening measures approximately one micrometer in diameter, which is about a hundredth of a hair," Fertig explains. "First you drip a droplet of this cellular solution on the chip. Then you vacuum a cell into the opening of the chip via negative pressure."

The impact of the drug developers' process even goes further. "I can vary the voltage to change the cell's condition, to stimulate the ion channels with a certain rhythm," Fertig says. "I can simulate every situation a human body is exposed to."

Together with two colleagues from university, Fertig founded his own company, NANION, in 2002.

Michael George was the first to join, and a year later the physician Andrea Brüggemann joined. The development started with robots which were only able to examine one cell. Later the number of cells increased from four, to eight, to 96 cells. 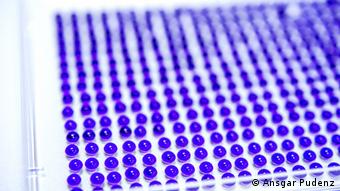 A test run can handle 384 cells

However, the method only became a success in 2013 with the development of the chip for 384 cells. This chip perfectly fits the standard of pipette-robots used in the pharmaceutical industry and in research facilities.

"It was quite a rapid development. It only took six months from the idea to the first machine," the biophysicist Michael George remembers. "The modules enable us to produce many machines in a simple way. We don't have to produce huge robots ourselves. We take our module to the customer instead, whereas the pipette-robots are constructed by another company."

Before the first machine was shipped in 2013, there was a lot of demand. In the meantime, almost every huge pharmaceutical company and research facility all over the world runs a machine made by the company.

Aside from their achievement, George also puts the success of the young company down to time spent at the Ludwig Maximilian University in Munich. Niels Fertig and Michael George wrote their PHDs there.

The University supported the young entrepreneurs with rooms and a part-time position.

"Of course, Niels has been the most important factor. He really wanted this. But we had role-models at the Center for Nanoscience as well," says George. "This showed us that it is indeed possible."

And a pioneering spirit is important for scientists to develop ideas.