Deutsche Post DHL is developing and manufacturing its own electric delivery vans, called "StreetScooters." The first 2,000 will roll off assembly lines in 2016. The firm intends to electrify its entire fleet. 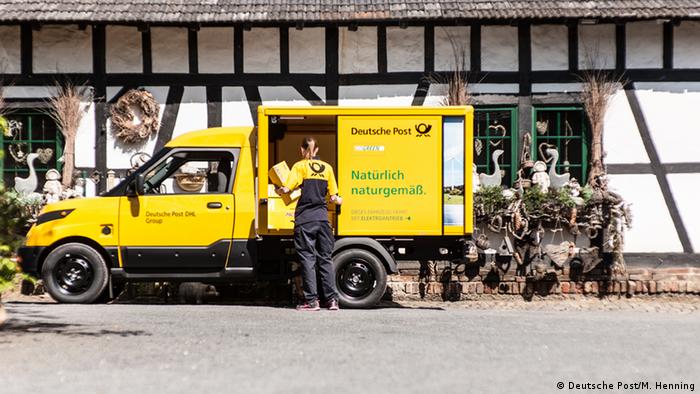 At the moment, Bonn-based Deutsche Post DHL Group (DPDHL) has a fleet of around 92,000 vehicles roaming the highways, streets and lanes of 220 countries and territories around the world. After emerging from the privatization of Germany's post office in 1995, the company has become a marked success - it's now the biggest logistics and delivery services company in the world, with nearly half a million employees.

Electrifying the entire fleet sounds like a tall order, but the company is confident it can be done: "This isn't a crazy vision. It's a reality that in the medium term, we can drive with e-vehicles exclusively," CEO Frank Appel said in Düsseldorf, adding that the company sees this as a competitive advantage.

Appel didn't want to provide time-lines or details of the company's long-term transition to e-mobility, because a lot of them haven't been nailed down yet. But some major steps taken in the past two years suggest the company's drive toward an all-electric vehicle fleet is for real. 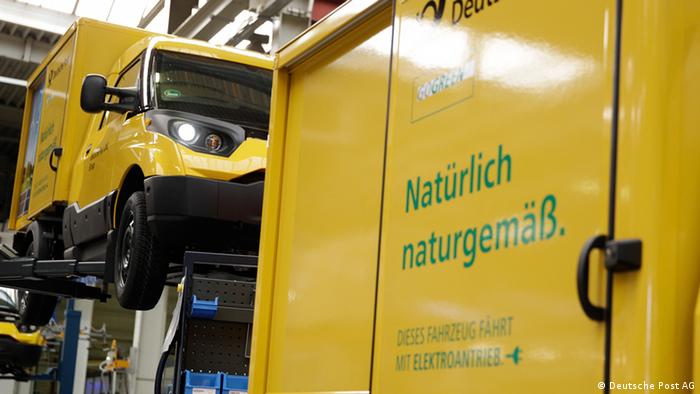 StreetScooter production line in the "Waggonfabrik Talbot" factory in Aachen

A central and rather astonishing element of DPDHL's e-mobility strategy is that the company has begun to produce its own electric delivery vans. In 2014, DPDHL bought a startup called StreetScooter, which began life in 2010 as a research project launched by a duo of engineers connected to RWTH Aachen, a technical university in the ancient town of Aachen, site of Charlemagne's imperial court, around 100 km (62 miles) west of Bonn.

StreetScooter worked with a variety of companies from the get-go in its effort to design urban delivery e-vehicles for short distances - including DPDHL. After DPDHL bought the startup, the research project morphed into a full-on vehicle production effort.

A few different e-van models are in development at StreetScooter, the first of which is set to be produced in quantity this year. An increasing number of prototype small cube vans optimized for mail and parcel delivery have already been on the road for Deutsche Post since StreetScooter built the first one in 2012, getting tested under real-world conditions so that DPDHL delivery workers could provide design input. A total of some 500 prototype units are now on the road in Germany and the Netherlands. 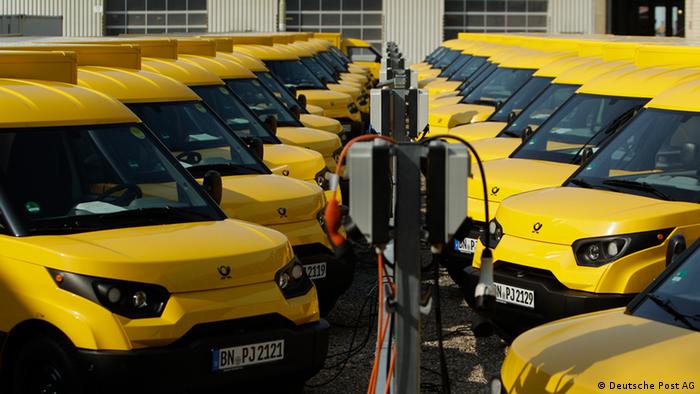 Alexander Edenhofer, a press officer for Deutsche Post DHL, told DW that the StreetScooter vans had been designed with ergonomic criteria in mind: "The delivery workers helped us work out what sort of dimensions and features would make it easy to load and unload packages from the vans," which is why the cube can be accessed from either side or from the back. The height of the flatbed was designed with workers' lower backs in mind. "Ease and safety of parking was another criterion, so the vans have rear-facing cameras built in."

Two additional, larger models are in development, according to Edenhofer. It's not yet known when they'll be deployed. One open question is at what point battery technologies will have improved to the point that vans will be able to undertake longer-distance deliveries in rural settings. The current StreetScooter's range makes them suitable only for urban deliveries.

The first 2,000 production units of StreetScooter's small cube van will roll off assembly lines at "Waggonfabrik Talbot," a former railway wagon factory in Aachen, by the end of 2016. Powered by 30 kW asynchronous electric motors fed by lithium-ion battery packs, the vans will have an in-service range of 50 to 80 km between rechargings, depending on load mass and driving conditions, and a top speed of 80 km/h. They can carry up to 650 kg of load at a time, and weigh about 1500 kg empty.

Electric cars – the battery is key

The current plan is to gradually ramp up production to around 5,000 units a year, and eventually replace up to 30,000 of DPDHL's delivery vans with StreetScooter e-vans. Edenhofer said no decisions had yet been made on whether StreetScooter would eventually sell e-vehicles to third parties.

"For now, we need StreetScooter's full production capacity for DPDHL's own needs," Edenhofer said. "We've had quite a few inquiries, though. Municipalities, tradesmen, even competitors in the package delivery business."

StreetScooters aren't the only effort DPDHL has made at reducing pollution emissions from its vehicle fleet. The company boasts that "22,500 technical modifications have been implemented on approximately 13,500 of the vehicles in the DPDHL fleet," including installations of electric and hybrid drive systems, alternative fuel systems, electric and aerodynamic modifications.

For DPDHL, environmental virtue and cost factors point in the same direction. Electricity is cheaper than gasoline or diesel fuel. E-vehicles tend to be more durable than vehicles powered by internal combustion engines, and also cheaper and easier to maintain. Provided its StreetScooters can be produced cheaply enough compared to the alternative of buying e-vans from established auto makers, the bottom line of the world's biggest delivery services company stands to benefit from producing its own delivery vehicles - whether or not it eventually adds profits from sales of e-vans to third parties.

Volkswagen has presented a new electric minivan at the Consumer Electronics Show in Vegas. The concept car is meant to reconnect with the mystique of the 1960s VW microbus, even as it showcases the latest technology. (06.01.2016)

The German government is offering buyers up to 4,000 euros to buy an electric car as part of a scheme to subsidize electromobility. But critics on both sides have their doubts about the new incentive. Ben Knight reports. (18.05.2016)

The stakes are high for Tesla and its new mid-priced Model 3. Growing competition in the electric car market and a dwindling amount of cash have left the company fighting for its survival. (12.05.2016)