Deutsche Bahn to Recall Part of High-Speed Train Fleet | Germany| News and in-depth reporting from Berlin and beyond | DW | 24.10.2008

German railways company Deutsche Bahn said Friday it would idle the most modern type of its bullet trains, amid fears that the axles of the ICE-T trains were cracking. 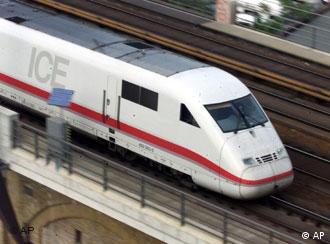 Deutsche Bahn blamed the major disruption to German passenger services beginning Saturday on the manufacturers of its 71 ICE-T trains.

The consortium, which consists of Germany's Siemens, France's Alstom and Canada's Bombardier, refused to provide "reliable data" on the safety of the axles, said DB Chief Executive Hartmut Mehdorn.

A cracked axle was blamed earlier this year for a low-speed ICE derailment at Cologne station in which nobody was hurt.

Passengers have worried since that an axle might fail while one of the trains is moving at the normal cruising speed of between 200 and 300 kilometers per hour.

Rail schedules have been disrupted over the past two weeks after the frequency of checks on both ICE-T and ICE-3 trains was increased after a further crack was found.

"Safety has the absolute priority," said Mehdorn on Friday. "We see ourselves as having been left dangling (by the consortium), which has confronted us with unreliable and unclear information."

He did not elaborate on how long the stoppage would last.

The ICE-T model is designed to tilt slightly on curves. Other models of the bullet-nosed red-and-white ICE trains -- the abbreviation stands for intercity express -- were not grounded.

Among routes likely to face delays are Hamburg-Berlin, joined by a popular hourly service that takes just 95 minutes, and a route between the financial centre of Frankfurt and the Austrian capital Vienna, which also employs the ICE-T model.

Deutsche Bahn said a late Thursday derailment by a slow-moving empty ICE train in Hamburg station appeared to have a different cause, human error.

Berlin was hoping to generate billions of euros from the sale of its national railway, but now with the international financial crisis perhaps it's better if they wait for a better time. (09.10.2008)

Deutsche Bahn Gears Up for Share Listing With Higher Earnings

Germany's state-owned railway company Deutsche Bahn prepared the ground for its stock market debut later this year by unveiling solid increases in earnings and revenue, and record passenger traffic for 2008. (18.08.2008)