German rail company Deutsche Bahn can now use its high-speed ICE trains to carry travelers through the Channel Tunnel. The decision paves the way for greater competition in the European rail sector. 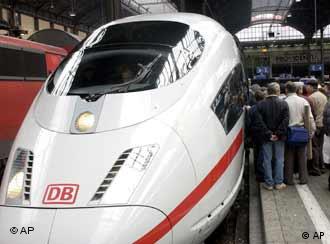 Until now, Deutsche Bahn trains were not permitted to take travelers through the tunnel

Deutsche Bahn has been given the green light to carry passengers through the Channel Tunnel on its high-speed Inter-City Express (ICE) trains, the head of the Eurotunnel group announced in a press report on Wednesday.

"Deutsche Bahn fulfills all the conditions for transporting passengers via the tunnel," Jacques Gounon told the Financial Times Deutschland, adding that the German railway company was now welcome to do so.

The German company had previously been banned from using the tunnel because its trains did not meet special fire safety regulations, but that ban has now been lifted, a Eurotunnel spokeswoman told the newspaper. 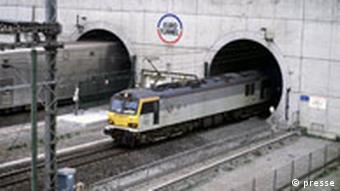 The Eurotunnel allows trains to travel underneath the English Channel

The move is expected to increase competition in European rail sector. Until now Eurostar trains controlled by the French national railway SNFC were the only services permitted to carry passengers through the 38-kilometer (24-mile) tunnel linking France and Britain.

The high-speed Eurostar services link London, Brussels and Paris Brussels via the tunnel, and are owned by SNCF, Belgian railway SNCB and Eurostar Ltd, which is a subsidiary of London and Continental Railways.

German rail operator Deutsche Bahn has unveiled large cuts to its freight service, including shutting down 72 freight yards and slicing some 4,000 jobs by 2011. (14.12.2009)

German rail operator Deutsche Bahn says it is close to completing a contract worth 17 billion euros with Qatar to help build a passenger and freight rail network in the wealthy Gulf emirate. (21.11.2009)

German national rail Deutsche Bahn is getting ready for a "bloody battle" with its French counterpart, SNCF. This after reports that the Paris-based company was intending to compete with DB on several inter-city routes. (30.10.2009)