Designers Say Berlin Is Not Alpha and Omega of German Fashion | Culture | Arts, music and lifestyle reporting from Germany | DW | 22.07.2008

Designers Say Berlin Is Not Alpha and Omega of German Fashion

Berlin may be making a name for itself as a trendy, cosmopolitan city with its own fashion week, but there is German fashion beyond the capital. And it's not all dirndls and lederhosen either. 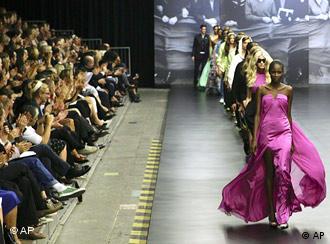 With only a few designers exporting German style internationally, it's sometimes difficult to see what's going on in the country's contemporary fashion scene.

The organizers of the Mercedes Benz Berlin Fashion Week had hoped to change that when they started their showcase three years ago. The only internationally-ranked fashion event in Germany, this year's four-day affair attracted such B-list Hollywood stars as Kim Cattrall of Sex and the City and Mischa Barton, previously of OC fame. 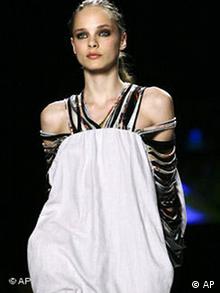 An entry in the Karstadt New Generation Award.

The events, which ended on Sunday, included runway shows by the German Joop! Jeans and UK vamp diva Vivienne Westwood alongside showcases by lesser-known locals like Leipzig-based Lac Et Mel and Lala Berlin.

The highlight of the week, however, came on Saturday night when a group of young designers displayed their wares while competing for the Karstadt New Generation Award.

If that competition is any indication, German fashion is something of a mixed bag. While winner Marcel Ostertag highlighted femininity with flowers and bows on a neutral palette, competitors Blutgeschwister went for form-fitting '60s-style mini-dresses in bold, neon patterns.

That look, which the designers of Blutgeschwister say expresses "a commitment to liberty and individualism, to hedonism and cosmopolitanism," seems to be in line with others that appeared during Berlin Fashion Week. The Anglo/German label Basso & Brooke likewise played up their haute couture with brilliant colors, mismatched patterns, and over-the-top accessories.

Still, haute couture is no reflection of what passes for style in the streets of Germany.

In the looks captured on the blog "Stil in Berlin" (Style in Berlin), Germans seem to prefer the unique to the timeless. Photos taken in the capital's fashionable Mitte district recently included a jumpsuit checkerboarded in pastels and star-emblazoned sweatpants.

"There's an incomparable degree of creativity and dynamism here," Olaf Gottgens, vice-president in charge for brand communication at Mercedes-Benz Cars told DPA news agency. "It's like no other city in Germany."

But designer Caroline Nippert, founder and head of the Cologne-based Cava-Cava label, cautioned against using Berlin as a gauge of what's going in Germany.

"Berlin has a completely different style than the rest of the country," Nippert said. "It's more experimental. Sometimes, I'd say, the fashion there is unique to a fault." 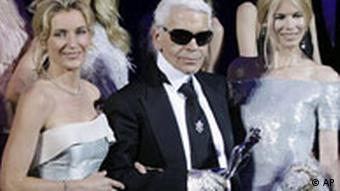 If Berlin, with its nine design schools and a high concentration of professional and amateur designers doesn't define German fashion, what does?

"To understand German fashion," Nippert said, "you have to understand the country well. Once you learn the language, the history, you'll see we're not flowery here. We like things clear-cut, precise. We're closer to the Scandinavians in that respect than, say, the French."

Still, France seems to be the place that established designers prefer to show. Despite appearing at this year's Berlin Fashion Week, Hamburg-born Karl Lagerfeld sat on the sidelines, relegating his own runway to Paris.

"Karl Lagerfeld is more French than German," Nippert said. "I'd say Hugo Boss represents Germany better, with their clean, straight lines. Of course there is a difference depending on where you go in the country -- the south tends to be a bit more conservative. But overall, Boss is a good representative look."

"The best way to make a woman happy"

Like fashion in other parts of the world, the German design industry has begun taking environmental issues seriously and incorporating more ethical elements into the production of their clothing.

Marcel Ostertag, who won the Karstadt New Generation Award, said that his clothes are made entirely in Germany, from the patterns to the finished pieces.

The Leipzig-based Lac Et Mel produces the world's first carbon neutral clothing. And in September, designers will be meeting for the first Oekorausch conference in Cologne to discuss ways to lessen the harmful impact of the clothing industry.

German fashion -- whether conservative or outrageous -- is not, it seems, so different from that in the rest of the world.

"Fashion," Nippert said, "has always been the best way to make a woman happy."

The 3rd Berlin Fashion Week comes to a close Sunday having drawn crowds of spectators and German glitterati galore to celebrate the four-day off-beat spectacle. (20.07.2008)

Berlin Looks for its Place on Fashion Map

Berlin's Fashion Week kicks off on Thursday, July 17. The young and hip, and established designers, will be showing their clothes all around the capital. Berlin hopes it'll attract attention in the wider fashion world. (17.07.2008)

Two German students have founded a fashion company that aims to use only ecologically and ethically sustainable business practices. They've been so successful, that they've won a major prize and postponed their studies. (18.11.2007)