Demonstrators protest against anti-Islam rally in Cologne | Germany | News and in-depth reporting from Berlin and beyond | DW | 09.05.2009

Police in Cologne say about 1,600 people have protested peacefully against racism and a controversial "anti-Islam" rally held by right-wing groups that oppose the building of a large new mosque in the city. 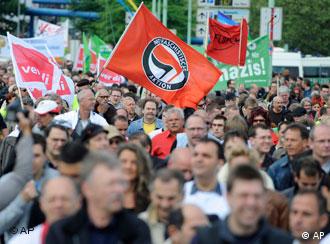 More than 1,500 people turned out in Cologne to protest against the anti-Islam rally

Hundreds of left-wingers and members of church groups, trade unions and the Green party held a demonstration in Cologne to counter an "anti-Islam" rally organized by two rightist groups.

"Today we're sending a signal that democrats stand united against right-wing radicalism, racism and agitation," said Reinhard Buetikofer, former head of the Green party, who took part in the rally in downtown Cologne.

Cologne Mayor Fritz Schramma said the peaceful protests by residents on Saturday showed that the city is "open and tolerant." He also said Cologne was "committed when it comes to defending these values."

Security was tight as more than 5,000 police officers, outfitted with water cannons and riot gear, cordoned off the square where the "anti-Islam" demonstration took place. The authorities were concerned that there could be clashes between the two sides, as has frequently been the case in the past.

Cologne police had banned the right-wing groups from holding a high-profile demonstration in front of the Cologne cathedral in the city center and instead allowed them to assemble at another, more obscure, square in the Deutz district.

Police say there were about 300 people at the right-wing "Pro Koeln" and "Pro NRW" rally.

The groups, which are campaigning against the building of a large new mosque in the city, held a larger rally last September which was joined by members of nationalist parties elsewhere in Europe. That protest sparked violent clashes and rioting by far-left demonstrators.

The two anti-Islam groups are opposed to the building of mosques and what they see as an influx of Moslem immigration into Germany.

Mayor Schramma vowed that the forthcoming national elections in September would not be used to exploit ethnic or religious tensions.

There will be no "sordid election campaign on the back of our foreign fellow citizens," he said.

Allegations of police brutality and human rights abuses by law enforcement officers in the German city of Cologne have surfaced in a news report. (24.09.2008)