Demonstrations mark 50 years of Easter peace marches in Germany | Germany | News and in-depth reporting from Berlin and beyond | DW | 01.04.2010

The first Easter march for peace in Germany took place in 1960 during one of the tensest periods in the Cold War. Fifty years later the marches have spread across the country, but their goal has remained the same. 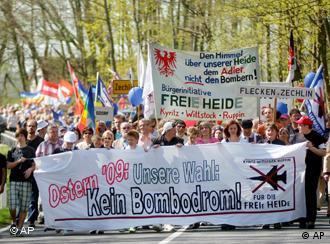 On the Monday after Easter 1960, about 1,200 people marched to the Bergen-Hohne military training area in northern Germany to protest training maneuvers with atomic weapons by German troops. Eight years later, the tradition had spread to more than 300,000 people in more than 300 cities in West Germany.

This year, the long tradition of Easter marches for peace and disarmament in Germany continues on Thursday with an opening demonstration in the central-eastern city of Erfurt.

Ute Hinkeldein, spokeswoman for the organizing group Thuringian Peace Coordination, said the goal of the demonstration was to make society more aware of the continued threat of nuclear weapons, and of the worsening situation in Afghanistan.

"Here in eastern Germany, you see the growing impoverishment of the population," she told Deutsche Welle. "And you have to ask yourself: Why can so much money be spent on war, but nothing be left for the poor?"

Participation in the Easter marches has widely varied over the decades. Willi Hoffmeister, 70, took part in the marches in the western city of Dortmund in the early 1960s.

"If you look at how we started off, with how few people we were and how we were bullied, there was really no recognition of us by mainstream society," he told Deutsche Welle.

After growing participation through the 1960s, numbers dropped in the 1970s, when German Chancellor Willi Brandt's relaxed policies toward the Soviet Union and East Germany calmed the political tension in Germany.

But the heightening of the arms race and growing fear of nuclear war in the 1980s led to a resurgence in the Easter marches.

"The bombs were going to fall on us, and that's why we this movement sprung up then," said Hoffmeister. "That was really the personal concern."

Hope for another resurgence

A central focus of this year's Easter marches in Germany is the war in Afghanistan, where the German government recently agreed to send an additional 850 troops. Ute Hinkeldein said she feared Afghanistan would ultimately end like the Vietnam War, with high costs to society and no ultimate victory. 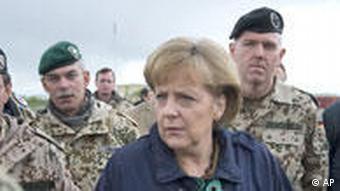 "I think that war is always a false solution," she said. "If we really want to and are able to help people, then we have to do it through aid organizations."

But after decades of hoping peace protests would eventually lead to disarmament, Hinkeldein said many citizens - at least in eastern Germany - have grown disillusioned with their own ability to effect change.

"We're trying to win the people back," she said. "The Easter march is a good piece of democracy, in which the citizen tries to play a part."

Easter marches march on ... or is that limping?

Leaders of Germany’s peace movement were talking up the positives from this year’s more than 70 Easter marches nationwide. But others noted that while there were a lot of marches, few of them drew many people. (13.04.2009)

Tens of thousands of people are expected to flock to the traditional Easter marches throughout Germany. From Good Friday to Easter Monday people will come together to call for world peace and an end to nuclear weapons. (09.04.2009)

Tracing their origins to a "Ban the Bomb" march in Britain 50 years ago, traditional peace marches are being held across Germany over the Easter holidays despite cold and sleet. But the movement has lost some momentum. (23.03.2008)

Protesters outside Büchel Air Base want the government to tell the United States to get its nuclear weapons out of Germany. But, with a war raging in Europe, they aren't getting much attention.

Thousands rallied for peace in dozens of cities as part of a German Easter tradition that spans decades. Protesters urged Berlin to reverse plans to hike military spending after Russia's invasion of Ukraine.