The ancient Greeks and Romans used snails for beauty treatments. Now 2,000 years on, snail farming is flourishing in Italy thanks to a new craze for slime-based skincare and health products. 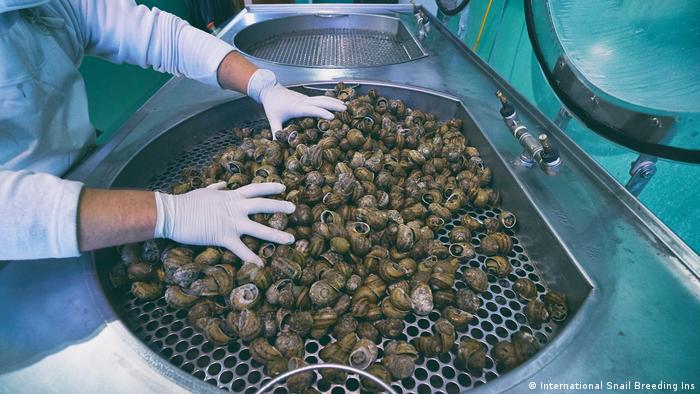 Like les escargots in France, snail farming in Italy used to be all about gastronomy. But over the past two years, Italian pharmacies and perfumeries have witnessed a growing interest in slime-based products. From anti-wrinkle face creams to children's cough syrups and antacids, this natural ingredient is gaining popularity.

"For over 20 years they've been making products with snail slime," says Simone Sampo, the president of the International Snail Breeding Institute in Cherasco, northwestern Italy. "But in the last six months there's been an increase of more than 40 percent in consumption."

A snail breeder for the past 21 years, Sampo is thrilled with the slime boom. "More and more people are discovering this product for the incredible benefits it has for the skin, the respiratory system and the stomach," he says. 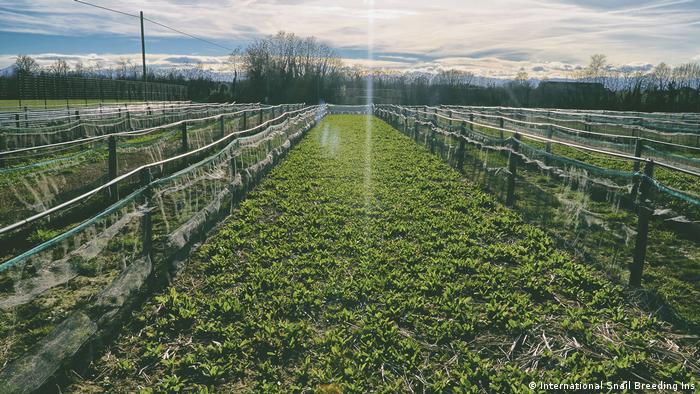 Snail farms, like this one in Cherasco, have started harvesting snail slime to meet the growing demand

The benefits of snail slime may have been common knowledge in ancient times, but its rediscovery dates back to the 1980s. Chilean farmers handling snails bound for the French market observed how soft and well moisturized the skin on their hands had become, and noticed that cuts and scars healed quickly.

Research confirmed that snail slime was naturally rich in vitamins, proteins and substances such as glycolic acid, allantoin, collagen and elastin - all of which are popular ingredients in cosmetics.

The ensuing increase in demand for slime has inevitably led to a boom for snail farmers. Over the last 20 years, snail breeding has taken off and the number of farms has trebled. 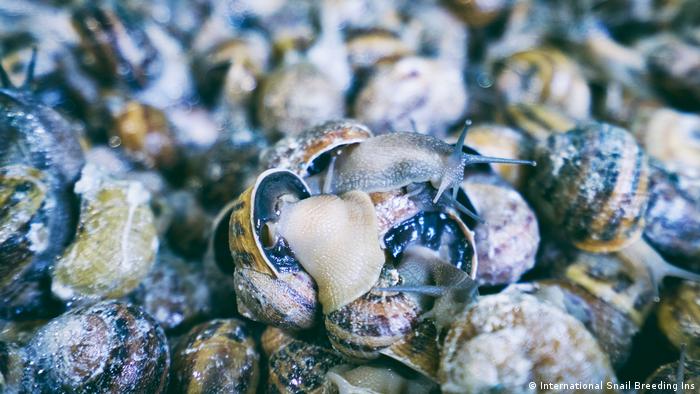 Snails release slime when they move around, and when they experience pleasure or fear

The Snail Breeding Institute has been running training programs and carrying out research into the helix snail species for the past 40 years. From nature to gastronomy, science to economics, the institute covers every aspect of snail husbandry.

There are eight snail farms around Cherasco alone and some 4,000 farms in the breeders' network throughout Italy. They all adhere to the institute's philosophy of natural, outdoor breeding: no greenhouses and no animal feed, only fresh plants. 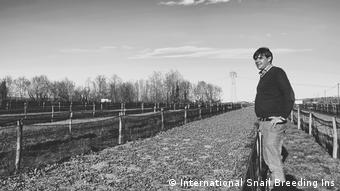 A field on Monica Fissore's farm, 50km south of Turin

"The snails love sunflowers," says local breeder Monica Fissore, who set up her farm, Il giardino della lumaca (The Snail Garden) four years ago. She has over a million snails and feeds them a diet of flowers and vegetables, growing all the extra food herself around the farm's perimeter.

Until recently, Fissore's snails were destined for consumption, but she is now starting to sell them for slime extraction.

The Snail Breeding Institute regularly holds free introductory seminars for prospective snail farmers and the 80 available places are invariably filled. Participants come from all over Europe as well as from Australia, South Africa, Latin America and the Middle East.

Simone Sampo has spent almost a decade researching the best way to extract slime without harming the snails.

"In the past they threw salt or vinegar on them, stimulating the snails to produce slime but also killing them immediately afterwards," Sampo explains, adding that the extraction process not only killed the snails "but also led to a much lower concentration of mucopolysaccharides in the slime than the snail normally produces when it feels fine." 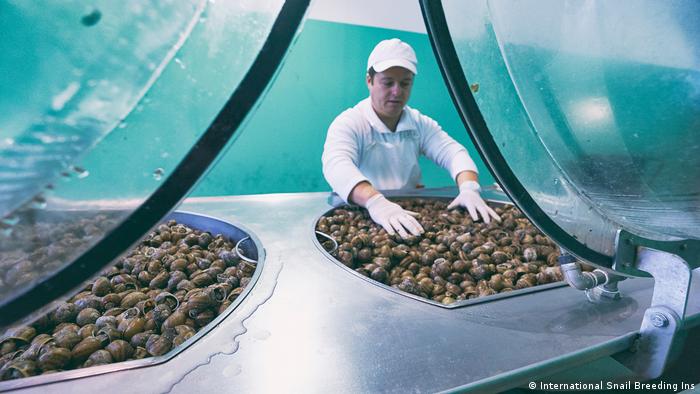 Mucopolysaccharides, like hyaluronic acid, are naturally present in connective tissue and important for hydration and lubrication. Happy snails, Sampo concluded, would produce better quality, richer slime. "My idea was to prevent the snail from suffering and to make a machine that would avoid contamination and allow extraction from the same snails more than once."

The machine his team eventually came up with is called the MullerOne, named after the Helix Aspersa Müller snail variety. The metal structure has two plexiglass domes under which 1,500 snails can be placed. Twenty kilos of snails produce approximately three litres of slime in the one-hour extraction process. 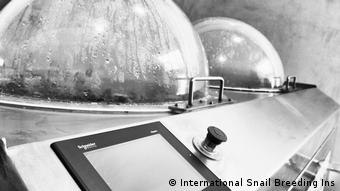 Snails are treated to an ozone shower inside the MullerOne

'A spa for snails'

According to Sampo, snails produce slime for three reasons: locomotion, fear and pleasure. He maintains that the ozone-infused water gives them a sense of well-being and the stimulating lotion a sensation of pleasure. "We consider this machine as a spa for snails," beams Sampo, who says the same snails can safely be used for more than one extraction in a day.

The slime passes through a drip tray, down a funnel and into a sterile container, ready to be sold. "With our machine we extract uncontaminated, standardized, cruelty-free slime," says Sampo with pride. He is so confident about the slime extracted using the MullerOne that the institute has now launched its own line of slime-based cosmetics as well as a cough syrup and liquid antacid. 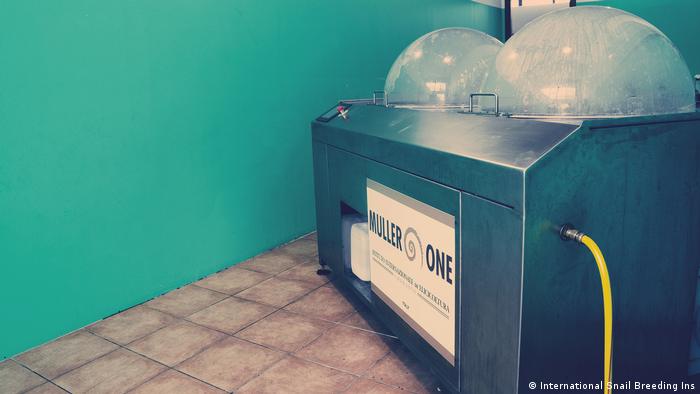 The institute's communications manager, Sara Borio, admits that consumers often have a problem with the idea of ingesting snail slime or rubbing it into their skin, but she believes the desire to use natural rather than chemical products is helping people get over the "ew" factor.

"The consumer is more aware of what he eats, what he puts on the face, on the body, so there is a growing market in these natural products and there's also space for snail slime," she says.

Their range of creams and lotions contain a minimum of 70-90 percent snail slime, effectively replacing the usual water content. But she warns consumers to beware of misleading marketing:

"In Italy there are several products that declare they have snail slime but the percentage is really low," Borio says, advising consumers to avoid products which list "extract of snail slime" and to opt for those explicitly containing "snail slime."

It's a slug's life

Tiny and slimy, slugs have the power to disgust, repel - and strip gardeners of their lettuce and their nerves. But for all their unappealing attributes, they are unique survivors that provide a legitimate eco-service. (13.01.2017)

Find the recipes for a Salt & Oil Body Peeling and a Facial Mask with quark and honey from our current 'In Good Shape'-report here. (18.06.2014)

Koalas eat toxic leaves but humans are their biggest threat 02.10.2022

In this week's edition we find out how Rwanda is improving groundwater management and building up climate resilience, look at Germany’s meat substitute boom and at flowerpots made from discarded monitors in Cameroon.

Rwanda is going through a water crisis. The government and NGOs are now joining forces to prioritize water management in the country. Using groundwater in drought-prone areas might help address water scarcity.