Defense Minister Says Germany in for the Long Haul in Lebanon | Germany | News and in-depth reporting from Berlin and beyond | DW | 29.10.2007

Defense Minister Says Germany in for the Long Haul in Lebanon

Defense Minister Jung said in Beirut on Monday, Oct 29, that Germany would maintain its long-term commitment to Middle East peace as part of a UN maritime force patrolling the Lebanese coast. 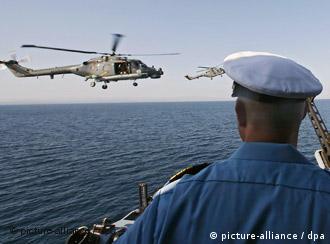 Visiting German navy personnel heading the UNIFIL force off the Lebanese coast, Defense Minister Franz Josef Jung vowed that Germany would stay involved in the Middle East until peace is achieved. The mandate of the German army is closely linked to the progress of the peace process, he added.

Germany heads the international UN maritime force charged with patrolling the waters off Lebanon to prevent weapons being smuggled to Hezbollah guerrillas by sea. The force was created in accordance with the UN-brokered cease-fire that ended last year's fighting between Israel and Hezbollah guerrillas.

Germany is the main contributor with around 820 German soldiers stationed in the region. In September, the German parliament extended the UNIFIL mission by another year.

"UNIFIL is a comprehensive mission which involves ground forces which are also helping the army but we Germans are responsible for maritime security," Jung said as he visited navy personnel on the frigate Bayern, the lead vessel of the maritime taskforce. German soldiers are also involved in training the Lebanese navy. 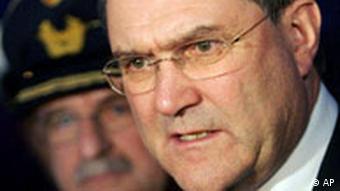 The deployment of the German navy in Lebanon is significant because it marks the country's first peacekeeping mission in the Middle East since the end of World War II.

The mission sparked much debate in Germany last year after Israel called on Berlin to send soldiers to the region as part of a buffer force in south Lebanon to police a ceasefire between Israel and Hezbollah and prevent further fighting.

At the time, Merkel said there was no question of sending any ground troops to join UN forces in Lebanon due to the fear, as she put it, that Germans could even "accidentally" aim their weapons at Israelis.

"This mission comes in view of our special responsibility for Israel," said Merkel in reference to the murder of around six million Jews by the Nazis.

Germany currently has about 10,000 troops on foreign missions in the Balkans, Lebanon and Afghanistan. Lebanon is the first leg of Jung's five-day tour of the Middle East. The minister is also to visit the United Arab Emirates, Jordan and Israel.

Jung's visit to the Middle East is followed by a trip to the region by German Foreign Minister Frank-Walter Steinmeier to lay the groundwork for a US Mideast conference planned for the end of November.

The plan also aims to increase EU assistance in the training of Palestinian police and judiciary as well as in the educational and civil service sectors with greater EU assistance focused on Palestinian universities and students.

Steinmeier said earlier this month the aim was to help wean Palestinians off development aid by helping to strengthen their private sector. The EU and its member states are estimated to have pumped in financial and humanitarian aid worth around 800 million euros ($1.14 billion) in the region so far this year.

German Foreign Minister Frank-Walter Steinmeier plans to visit the Middle East in the coming weeks as part of preparations for the Mid-East conference due to take place in the United States at the end of November. (19.10.2007)

The EU and the US have failed to resuscitate the Middle East peace process. Worse still, the West has contributed to the current crisis in the Palestinian territories, according to Middle East experts. (19.06.2007)

The European Union announced Monday that it would immediately normalize ties with the new Palestinian government amid plans to provide the cabinet with funds and send aid to the Gaza Strip. (18.06.2007)

Do you think Germany should take on a bigger role in the Middle East peace process? Please include your name and country in your reply.