Rescuers and volunteers in western Japan are continuing efforts to find survivors amid mud and debris after Wednesday's devastating landslides. More that 40 people are confirmed dead, with dozens still missing. 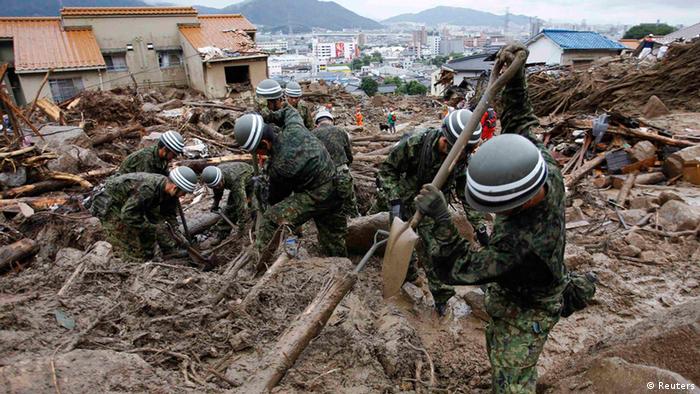 Emergency officials combing through destroyed houses on the northern outskirts of the city of Hiroshima, 700 km (435 miles) from the capital, Tokyo, found two more bodies on Saturday, bringing the death toll from Wednesday's landslides to 42, a police spokesman said.

Police said at least 43 people were still missing, and that this number could rise, according to the Kyodo news agency.

More than 3,000 rescuers and volunteers were stepping up efforts to find bodies and survivors on Saturday amid a break in the weather, reports said. However, meteorologists were predicting a heavy downpour by evening.

Rescue workers suspended operations for hours on Friday afternoon when a change in the shape of the surrounding mountains seemed to presage more landslides.

More than 2,400 residents of the northern part of Hiroshima took shelter in emergency refuges after authorities issued evacuation orders for some areas.

Among those killed was a 53-year-old rescue worker, Noriyoshi Masaoka, who was swept away by sliding land on Wednesday while trying to rescue a 3-year-old boy, who also died.

Landslides are a constant risk in Japan where many homes are built on or near steep slopes. Experts say that the highly water-retentive soil in Hiroshima makes the city particularly prone.