Rescuers in Ecuador have continued to sift through rubble where structures once stood as they look for survivors. Authorities now estimate at least 272 dead and more than 2,500 injured, also inmates break out of prison. 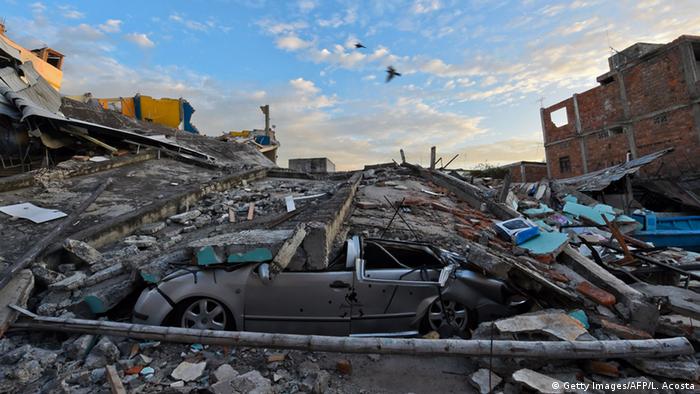 Much-needed aid began to flow Sunday into areas devastated by Ecuador's strongest earthquake in decades, and the death toll continued to rise as people left homeless hunkered down for another night outside in the dark.

More than 3,000 packages of food and nearly 8,000 sleeping kits were being delivered Sunday. Venezuela and neighboring Colombia, where the quake was also felt, organized airlifts of humanitarian aid. The European Union, Spain, Peru and Mexico also pledged aid. Spain sent a team of search-and-rescue experts and dogs in a military plane on Monday morning.

Upon visiting the areas hit worst by the quake, Ecuadorian President Rafael Correa put the death count at 272, adding that the number will "surely rise, and in a considerable way." 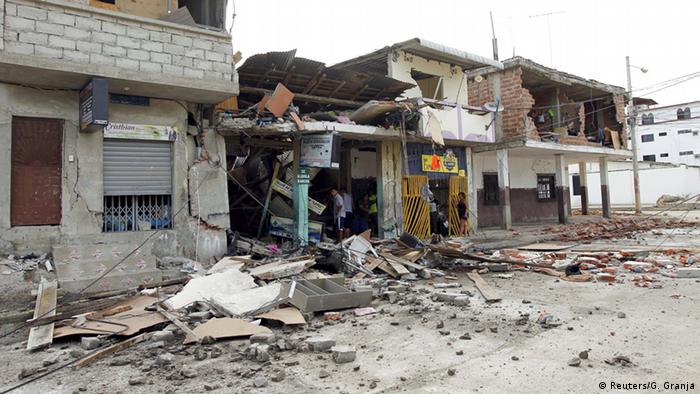 Heavy damage was reported in the cities of Manta (pictured), Portoviejo and Guayaquil after the quake struck after nightfall Saturday.

The epicenter of Saturday's quake was 170 kilometers (106 miles) northwest of the capital Quito, which suffered little damage beyond cracks in walls and a blackout.

Correa, who cut short a trip to Italy, declared a national emergency and urged Ecuadoreans to stay strong.

"Everything can be rebuilt, but what can't be rebuilt are human lives, and that's the most painful," he said in a telephone call to state TV before departing for Manta.

"The pain is very large, the tragedy is very large, but we'll find the way to move forward. If our pain is immense, still larger is the spirit of our people," he said in an address from the hard-hit city of Portoviejo as soon as he arrived.

The quake wrecked buildings, brought down power lines and sent frightened people running from their homes when it struck a coastal zone popular with tourists.

At least 100 inmates in a prison in the western town of Portoviejo escaped when the quake shook their facility, Justice Minister Ledy Zuniga tweeted, though 30 were back in custody after some surrendered to police and others were recaptured.

"Nearly 100 people escaped, national police are working to recapture," she wrote on Twitter.

But the scale of quake destruction is on the rise as volunteers continue to search for signs of life among the ruins.

"We have already recovered three dead and we believe there are 10 to 11 people still trapped," one worker digging through the debris of what used to be a six-story hotel called El Gato, told the AFP news agency.

Other coastal resorts were equally hard-hit with hundreds of deaths reported.

"Pedernales is devastated. Buildings have fallen down, especially hotels where there are lots of tourists staying. There are lots of dead bodies," Mayor Gabriel Alcivar told local media.

"You could hear people screaming from the rubble," survivor Agustin Robles told the Reuters news agency as he waited in a line of 40 people for water outside a sports arena in Pedernales. "There was a pharmacy where people were stuck and we couldn't do anything."

The US Geological Survey originally said the quake measured a magnitude of 7.4 then raised it to 7.8. It had a depth of 19 kilometers (12 miles) and more than 135 aftershocks followed, one as strong as magnitude 5.6, and authorities urged residents to brace for even stronger ones in the coming hours and days.