At least 14 people have been confirmed dead after last week's avalanche on Gran Sasso mountain. According to Italian officials, 15 guests and staff members remain missing in the Rigopiano hotel. 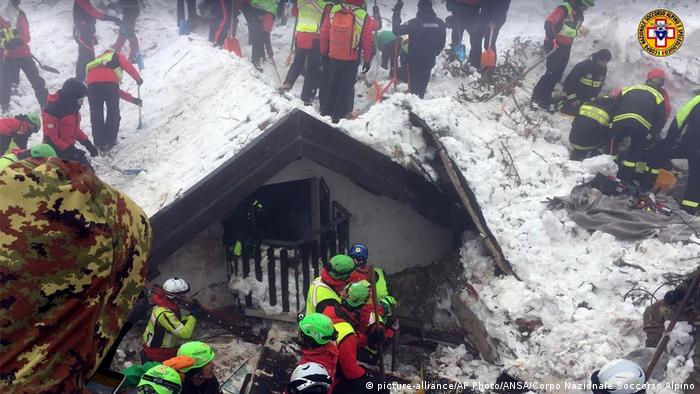 Almost a week since an avalanche plowed into the Rigopiano hotel in central Italy, officials have confirmed that five more bodies have been pulled from the ruins, bringing the death toll to 14. Elevenpeople have been rescued since the disaster- four of them children - while 15 guests and staff members remain missing. Some 120,000 tons of snow barreled down a mountain, tore through a forest, and engulfed the hotel at a speed of about 100 kilometers per hour (62 miles per hour). The force of the avalanche moved parts of the hotel some 10 meters (33 feet) from where they originally stood.

The news on Tuesday came just a day after firefighters succeeded in breaking down a wall in the hotel and pulling three puppies to safety. 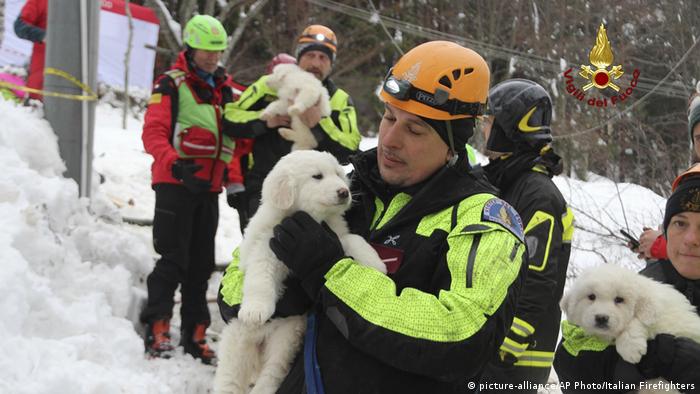 Despite the discovery of three puppies beneath the avalanche, hopes of finding more survivors are dwindling

Fire services spokesman Luca Cari, stressed, however, that the discovery of the puppies didn't necessarily signal any new hope for finding human survivors.

"We're happy to have saved them, and these are important moments in a dramatic situation," he said. "But I don't think there's much correlation with finding other people."

The seven-week-old puppies are the offspring of hotel mascots Nuvola - meaning Cloud, and Lupo - meaning Wolf - both of whom fled to safety into the valley below the hotel on the day the avalanche struck.

Five of the first survivors to be rescued were also released from hospital on Monday including a family of four. It was Giampiero Parete - the father of the family - who first sounded the alarm after he left the hotel by chance to go to his car, moments before the avalanche hit.

Still hospitalized were one adult and two children, Samuel Di Michelangelo and Edoardo Di Carlo. Officials have confirmed that Edoardo's parents were killed, while Samuel's remain unaccounted for.

Hopes are dwindling over 24 hours after an avalanche struck a luxury mountain hotel in Italy, burying at least 30 people under tons of snow and debris. So far, rescue authorities say they have recovered just two bodies. (20.01.2017)